Solskjaer says United are getting PSG at a perfect time

‘We’ve given ourselves the best possible opportunity’ 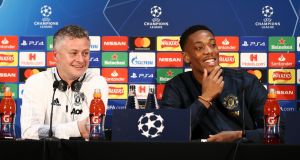 Manchester United caretaker manager Ole Gunnar Solskjaer with Anthony Martial during a press conference ahead of their Uefa Champions League Round of 16 match against Paris Saint-Germain. Photo: Jan Kruger/Getty Images

Manchester United caretaker manager Ole Gunnar Solskjaer believes his side are facing Paris St Germain at the perfect time as their outstanding run of form continues.

When the draw for this match was made in December, few gave Jose Mourinho’s United much chance of advancing beyond the Champions League’s Round of 16.

But United have been transformed since Solskjaer replaced the Portuguese, winning 10 and drawing one of his 11 games in charge.

“We’ve given ourselves the best possible opportunity because of the way we’ve come into this game,” Solskjaer said.

“We’re confident and we’re looking like a team. If there was ever a time to go into big games, it’s now.”

United’s surge under Solskjaer has seen them force their way into the Premier League’s top four, but their upturn in form is yet to impress the European oddsmakers and they remain unfancied in the Champions League.

That does not concern Solskjaer, however.

“I think the squad is very capable of winning against any opponent,” he said.

“When we go into games confident as we are now, in form, we are looking forward to the game.

“We can’t look too far ahead, we’ve got to look at PSG now and make sure we go through and take the next challenge as it comes.

“But I’ve been very pleased with the attitude. I’ve said to the boys, we have to keep working every single day.

When we work hard, we work hard. When we have lighter training, we concentrate. Then we can improve and maybe surprise people.“

United are second favourites against PSG, who have come a long way as a club from the side Solskjaer played against for Molde in the Cup Winners’ Cup back in 1995.

“It has been fantastic to see their progress,” he said. “They’ve got some of the world’s best players. They’ve got a goalkeeping legend in Gianluigi Buffon, Thiago Silva is one of the best centre-backs in the world and they’ve got one of the most exciting young players in (Kylian) Mbappe, Neymar as well.

“That tells you everything about their evolution. We know we will play against a team with confidence because they are used to winning.”

Not all of PSG’s considerable attacking talent will be on the pitch on Tuesday however, with Edinson Cavani joining Neymar in the treatment room, while right-back Thomas Meunier is also ruled out.

“Of course any team that is missing players like Neymar, Cavani and Meunier will feel the affect,” Solskjaer said.

“But it gives other players a chance and maybe they are more unpredictable for us with who they are going to play.

“When you’ve seen that front three for the whole season you know what to expect but this time around we’re guessing a little bit.”

In contrast, United got an injury boost with Victor Lindelof able to train on Monday, with Antonio Valencia and Matteo Darmian the only absentees with minor knocks.

The club also announced that Ashley Young has signed a new one-year contract, having entered the final months of his previous deal.

The PSG game starts a huge couple of weeks for United, who face Chelsea in the FA Cup before Premier League title challengers Liverpool visit Old Trafford on February 24th.

Asked if this was a fortnight which could define his hopes of landing the United job full-time, Solskjaer said that was too simplistic.

“You need to change the script,” he said. “You have so many ways of asking that question. That’s too simple.

“There are still a few more months left of this season for me to do whatever I can for the club.”