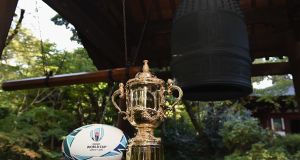 There is “phenomenal interest from rugby fans both in Japan, and abroad” for next year’s Rugby World Cup, according to the tournament organisers.

With 437 days to go until kick off in Japan, over 2.5 million ticket applications have been made since the priority process began in January 2018. They closed late last month.

Tournament organisers are targeting a total of 1.8 million ticket sales - there were 2.3 million tickets made available for the World Cup in England in 2015 - and “demand, particularly among the top-ranked teams pool matches and finals series, has been exceptionally strong”, according to World Rugby.

The next opportunity to secure tickets begins on September 19th with the opening of general ticket sales to the public.

“However, my message to those fans who have not yet been successful is to apply again in September 2018 when the next ballot phase opens. There are still plenty of great tickets available and we want to ensure that we welcome as many fans as possible to this once in a lifetime tournament.”

Rugby World Cup 2019 will be the first time the tournament will be held in Asia and the first to be hosted outside of the traditional rugby powerhouse nations. The 48 matches will be played across 12 host cities stretching from the northern island of Hokkaido, to southern island of Kyushu.

World Rugby chairman Bill Beaumont added: “It is very encouraging to see such strong demand for tickets during the early sales phases. The level of interest creates a great sense of momentum going in to the next ticket sales period.”