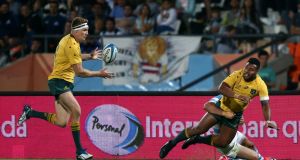 Australia’s Reece Hodge receives the ball from Samu Kerevi before scoring a try in the Rugby Championship match against Argentina at the Malvinas Argentinas stadium in Mendoza. Photograph: Marcos Brindicci/Reuters

Reece Hodge ran in two of Australia’s five tries as the Wallabies beat Argentina 37-20 on Saturday in Mendoza to finish second in the Rugby Championship while the Pumas failed to record a point for the first time since joining the tournament in 2012.

Argentina were in the game at 13-13 at half-time and level on 20-20 up to the hour but were down a man for the last 10 minutes with lock Marcos Kremer in the sin bin.

In the final standings, the Wallabies finished with 15 points, ahead of South Africa on 14 after the Springboks lost 25-24 to champions New Zealand in Cape Town earlier on Saturday.

The All Blacks finished with 28 points after six straight wins while Argentina failed to score a point.

The Pumas, whose previous worst showing in the southern hemisphere tournament had been the two points they collected in 2013, had a try disallowed in the first half for a knock-on and another in the second for a forward pass.

Australia took an 8-0 lead in the opening quarter with a Foley penalty and a try in the corner by Koroibete but Argentina came back to within a point when Alemanno touched down under the posts after several attacking phases, before a Nicolas Sanchez penalty put them ahead.

Hodge restored Australia’s lead after taking a long pass from scrumhalf Genia and going over unmarked after Pumas wing Emiliano Boffelli had drifted inside.

After Foley missed the conversion, another Sanchez penalty left the teams locked at 13-13 at half-time.

The Wallabies dominated the opening 10 minutes of the second half and Foley eventually darted through a gap in the Pumas defence to score their third try before converting.

Argentina replied within five minutes with a similar try from Gonzalez Iglesias, a late change before the match for Jeronimo de la Fuente who failed a late fitness test, and Sanchez’s conversion put them level again.

However, Australian pressure began to take its toll and Genia scored from Hodge’s pass before the wing went over twice, his first effort disallowed for a forward pass but his second giving him his second try of the game after Kremer was shown a yellow card for a dangerous tackle.