‘I suspect now we will be taken seriously as a club, perhaps as an organisation’ 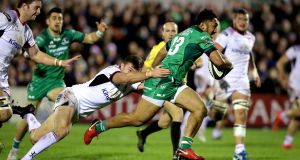 Connacht’s Bundee Aki skips past Jacob Stockdale of Ulster on his way to scoring his side’s second try during the Guinness Pro 14 game at the Sportsground in Galway. Photograph: Ryan Byrne/Inpho

What a win, what a night at the Galway Sportsground.

Connacht had demonstrated improving form over the last two weeks, but nothing quite indicated the performance or the result of Saturday evening’s comprehensive interprovincial victory over Ulster.

From a defeat to Zebre in the last Pro 14 outing, Connacht produced a record breaker against Ulster – the most points Connacht have every scored not only against Ulster, but any province, while equalling a record margin of victory against Leinster in 2012.

It was produced by a speed and intensity that was just too much for Ulster on the night, and it blew them off the park. It started within the first minute, and was incessant until Connacht fullback Tiernan O’Halloran chased down Johnny McPhillips the length of the entire pitch to fell the Ulster replacement on the line.

Connacht had outstanding displays all over the pitch, epitomised by locks Quinn Roux and Ultan Dillane; Jack Carty’s increasing maturity in controlling the game; O’Halloran’s outlandish chase; and a front row that demolished their counterparts. It left Ulster with “their tail between their legs” and Connacht in full festive mood heading into a three-day Christmas break before facing more daunting opposition at the RDS on New Year’s Day.

“A special one, bloody wonderful, personally extremely proud,” said a satisfied Kieran Keane. “A lot of hard work and difficult times. I think it is just reward for the boys, for the application and the attitude they displayed, a really good day for us and it hasn’t always been like that.”

While Keane might still “bristle” about comments made in the wake of some previous displays, this latest performance was an “emphatic answer” and “defining”.

“I love my players and I love my team, and we are working every day trying to do things right, so yeah, we have been working really hard, and we got the fruits of our labour today – a neat Christmas present for the boys and myself.

“Defining as in I suspect now we will be taken seriously as a club, perhaps as an organisation, and that will help us in terms of recruitment, retention, and a whole other side to the business. I think we have turned a little corner and I’m pretty happy about it.”

Connacht had done their homework, targeted the maul, and it set the tone for the evening.

Ulster, with the wind advantage in the first half, had no chance to take advantage when Keane’s side grabbed the opening try within three minutes. A poor up and under from Jacob Stockdale did not help, Connacht regaining possession. And from an ensuing penalty to touch, the Connacht pack drove with pace and power with flanker Eoghan Masterson touching down. Although outhalf Carty failed to nail the conversion, the Connacht Clan was already on its feet in the stands.

More followed as Connacht again capitalised on the counterattack, led by fullback O’Halloran. And with Matt Healy and Kieran Marmion heading for the gaps, Bundee Aki slipped out of Stockdale’s jersey pull to land the second after eight minutes.

Ulster, clearly below par with sloppy passing and poor out of hand kicking, was a “bit of a mystery” for Les Kiss, but it continued, although briefly interrupted by a 23rd-minute John Cooney penalty when Shane Delahunt was pinged for offside at the breakdown. Three minutes later and a superb restart from Healy was finished by O’Halloran who forced his way through Andrew Trimble’s tackle on the line.

Connacht’s defence was as effective as its attack, and although Ulster went through the phases, the dual presence of Healy and Tom Farrell forced the normally secure Darren Cave to lose possession and momentum. The only positive was a second penalty for Cooney after Aki was caught offside, but with a mounting penalty count in favour of the home side and another three-pointer from Carty, Ulster found themselves under the cosh again. It came courtesy of the maul which Connacht had targeted earlier in the week, and it “paid massive dividends”, including a yellow card for Ulster loosehead Andrew Warwick as Keane’s side stretched the lead to 23-6 after the break.

A second binning was issued to Louis Ludik for a deliberate knock-on, and Connacht’s pack marched over the line with Dillane touching down for the fourth try after 55 minutes. Openside Jarrad Butler finished off out wide for number five after Carty had once again provided the platform with his crossfield kick to Niyi Adeolokun.

Ulster enjoyed a brief respite when Craig Kilroy ran a direct line from a scrum after minutes earlier Ludik was denied when losing the ball over the line, but Connacht fans broke into Christmas carols on the terraces as Dillane rounded off an unforgettable night with another end to end score after Eoin Griffin’s intercept. An Ulster try at the death was off little consolation for Kiss as they return to Ravenhill to face Munster.

Replacements: T McCartney for Delahunt, P McCabe for Coulson and C Carey for Bealham (all 55 mins), J Cannon for Roux (56 mins), N Dawai for Butler and J Mitchell for Marmion (both 60 mins), E Griffin for Aki and F Leader for Adeolokun (both 63 mins).