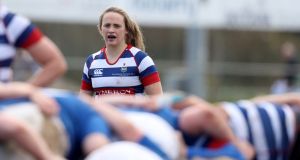 Blackrock player Michelle Claffey: “It’s nice to have someone there who has coached women before and can understand where we’re coming from.” Photograph: Oisin Keniry/Inpho

Whatever the future may hold, Michelle Claffey will fondly remember 2018 as a year in which she achieved some notable landmarks in her rugby career, from winning a first cap against Italy in the Women’s Six Nations Championship to last week helping Leinster to claim the interprovincial title.

The 28-year-old Offaly native is hoping that the success she has already enjoyed at international and provincial level will filter down to the club environment when the All Ireland League starts on Saturday week. Claffey will be an integral part of the Blackrock College club’s bid to unseat UL Bohemian as champions.

Despite the hardships of last season, there is renewed optimism in Stradbrook, not least because the team’s fortunes will be guided by former Ireland Women’s Grand Slam-winning coach, Philip “Goose” Doyle, who also during his tenure led the national side to a victory over New Zealand en route to a World Cup semi-final.

Claffey explained: “We have Goose [Philip Doyle] on board and he has come in and he is setting standards for us. We have been working hard, recruited hard and set our tone so that we have a very professional environment.

“He’s head coach, joined our coaching team over the summer. He’s brought a very different type of voice. He’s a very strong coach, strong personality and he’s going to make us play the way we should play. It’s fantastic. He has such good experience.

“He’s been involved with the Irish team. He knows his rugby inside out and all the sessions are planned so well, in that we’re building each week and people don’t have to ask as many questions; they [the players] remember what we did last week and it’s just a little build on. Because girls like to ask questions in training sessions,” she said, laughing.

“It’s nice to have someone there who has coached women before and can understand where we’re coming from. We’re not asking [questions] to be smart, we just don’t understand at times.”

In a progressive development for club rugby a sizeable portion of men’s and women’s All-Ireland fixtures will be played together on the same afternoon where possible in an effort to attract more members to both games and thereby create a better atmosphere. Blackrock hosts Galwegians in a double header at Stradbrook on Saturday week.

Claffey said: “Yeah, the guys are playing and then we’re on afterwards. It’s going to be a great day for the club. We’re building a great culture within Blackrock this year. We’ve got great facilities, our gym, our ice baths, a new shower block and an unbelievable pitch.

“We’ve got a good backroom staff in Blackrock, a good coach, a good set of S&Cs so we’re kind of pushing on not to be in that position where we’re looking at a game like ‘we have to win this or we might get relegated’. We want to go in and say ‘we have to win this, full stop’.”

From January 2019, the English RFU will award 28 fully professional, one-year contracts to the best women players in the country. Claffey admitted: “It’s great to see, a positive step. All you want is forward steps. You don’t want anyone going back.

“If it ever comes, I don’t think you’ll see it in my playing career, but it’d great to see that kind of professional set-up, people getting paid as their full-time jobs. At the minute now going into [2019] Six Nations, it will be Ireland versus England who are full-time professionals.

“We’ll have to step our game up, train really hard. We have to mind ourselves even harder, because we do our day job. But then I want to play, I will sacrifice whatever I need to sacrifice in order to get to play and perform at a proper level.”

The Ireland Women’s team will play November Tests against the USA in Donnybrook and England at Twickenham, a commitment is essential for the ongoing development of the national side and in providing a graduated stepping stone to test rugby, for which the club game or interpros simply does not suffice.

Claffey said: “It’s great to have the autumn internationals coming up again because it’s nice to have that standard. It’s very difficult to have AIL, inter-pros and then into your Six Nations, it’s an incredible step up. I can’t even explain it.

“Last year against England, the last five minutes of the match, I was like ‘come on, you’ve got to pick yourself up’ because the step up is massive. So having those games and keeping you at a certain level will benefit Ireland going into the Six Nations.”