RWC moments: God Save the Rose of Tralee

Before Ireland’s Call, the Rose of Tralee took up the mantle of Irish rugby song 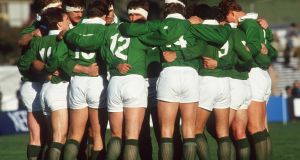 The Ireland team huddle as they listen to the Rose of Tralee in 1987. Photograph: Inpho/Billy Stickland

The late Con Houlihan, a son of Castle Island – he insisted on that spelling – came up with many wonderful lines during his time as Ireland’s premier sports writer but certainly one of the most memorable was “God Save the Rose of Tralee.”

It was a reference to the anthem that was played ahead of Ireland matches at the 1987 Rugby World Cup in New Zealand and Australia. In times past the Irish team stood for Amhrán na bhFiann before matches in Dublin and God Save the Queen for games in Ravenhill. Away from Irish shores protocol dictated that no anthem was played until Ireland’s Call arrived.

Trevor Ringland, a player at the time and speaking in an Irish Times interview with Malachy Clerkin in 2015 explained: “A month later we were standing in line in Wellington waiting to play in a World Cup, but we were without one of our best players because Nigel had had his career ended by an IRA bomb. So you can see why The Soldier’s Song wouldn’t have felt very appropriate to some of us.”

It was down to a set of circumstances that pertained at the time. Ringland had no problem reconciling his personal convictions and rugby commitments and would go on, in tandem with Hugo MacNeill, to organise the Peace International in 1996, in the wake of the London Docklands bomb.

“The way it always was for me was that coming to Lansdowne Road to play under the tricolour and stand for the anthem was never a problem because I was coming into an environment of friendship and one that wanted me to be there. As opposed to the people who wrapped themselves in the flag and the anthem and who were trying to murder people like me.

“I think if you use symbols in the right way, with respect to each other, then you take them away from the other guys – on both sides – who would use those symbols to cause division.

A compromise was reached following a players’ meeting that went on for quite some time. Prop Phil Orr had a tape of a James Last concert in Tralee – the German composer also contributed the theme tune to the Sunday Game on RTÉ – and one of the tracks was the Rose of Tralee.

The Irish players didn’t listen to it prior to the match and were underwhelmed when it was played over the loudspeaker, standing in stony faced silence waiting for the match to start; Land of My Fathers it wasn’t. It wasn’t a happy tournament from an Irish perspective as coach, the late Mick Doyle suffered a heart attack during the tournament, and the team would go on to lose in the quarter-final against Australia.