Rob Kearney: We just need to come together, close ranks 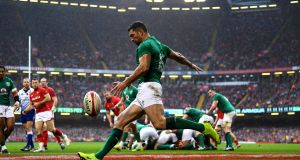 Rob Kearney in action against Wales at the Principality Stadium. “There’s no doubt about it, today was a tough day. It was tough watching one of your competing nations lift trophies.” Photograph: Alex Davids/Inpho

Their confidence in themselves would appear to have been damaged, although afterwards they maintained otherwise.

In any event, Ireland have five months to stew on this, or park it. Then it’s a case of how they, if not reinvent themselves, then at least rebuild themselves. That has become a much more sizeable task now.

First off, what to do with the events of last Saturday, which will have left a dent in their collective confidence? Part of them will be inclined to try and forget it altogether, but England stored the painful memories of Ireland’s Grand Slam winning, St Patrick’s Day coronation and used it to good effect on the opening weekend of this season’s Guinness Six Nations in the Aviva Stadium.

“Yea, you have to bank all these tough days,” admitted Rob Kearney afterwards.

“There’s no doubt about it, today was a tough day. It was tough watching one of your competing nations lift trophies. So, that is a memory. It’s a picture that will live with all of us for a long time over the next few months, and it will be brewing away. We just need to make sure we can use days like today to our advantage.”

An intelligent and articulate as well as experienced player, Kearney has been through many highs and lows. Asked if he thought there might be a backlash from the Irish rugby public, he said: “I’m sure there will be. There was a huge backlash after the England game. There was a little bit of a backlash after the Italian game, albeit we had won with a bonus point, but we hadn’t played particularly well.

“I’m sure there will be lots said about us as players and as a team over the coming weeks. But that’s part of being professional athletes as well. We just need to come together, close rank a little bit and never lose focus with how good we are as players, and as a team.”

Not only should they have enough credit in the bank to have the continuing support of the public but Kearney maintains that, despite the potentially damaging blows inflicted by this defeat, they will also retain their inner belief.

“But we still have a huge amount of confidence in how we are as a team, in terms of what we can achieve as team. We just need to be realistic that there’s lots of other really good teams out there too.”

This was not the Six Nations debut Tadhg Beirne had hoped for or imagined.

“Not the ideal. I think I pictured it a bit differently in my mind but that’s the way it goes, you are not going to win every game. I’m disappointed to say the least.”

For a team that last November were rounding off a stellar unbeaten year by beating the All Blacks for the first time ever on Irish soil, this would seem like quite a fall, but Beirne wasn’t of that opinion.

“Not particularly, no. Obviously we haven’t played to our potential, that’s all the problem is probably. I think definitely if we stick to what we know and what we done in the past we’ll definitely be able to improve, it’s probably about finding our feet again and putting in those performances.”

The fear always lurked that, like Ireland in Twickenham, Wales simply had more to play for, but Beirne was also adamant that Wales did not want it more.

“It certainly wasn’t the case for me anyway and I can definitely speak for everyone in there, that’s not like any player. Everyone goes out there to win and everyone was hungry for this, especially knowing it was Besty’s last game in the Six Nations and we spoke about that all week. We were eager to get out there and put in a performance. Unfortunately, it didn’t work out today.”

Garry Ringrose echoed Kearney’s sentiments when also maintaining: “I don’t think it’s about damaging confidence. You can’t win them all. I was lucky enough to be involved last year in a lot of wins. And then this year obviously the two defeats let us down.”

“But there are plenty of learnings from that point. So it wouldn’t be a massive regroup or did damage to the confidence. It’s just a really good learning opportunity – how can we adapt better?”

Tokyo Olympics wants Tiger Woods but will he be there? 17:29
Conor McGregor hails Donald Trump as ‘USA goat’ 16:13
Richard Johnson may have broken arm in Exeter fall 15:54
Sam Bennett grabs first win of the season at Santos Tour Down Under 12:06
Ole Gunnar Solskjær says 2-0 Liverpool defeat points to ‘strides forward’ 11:52
Here is your handy guide to sport on television this week