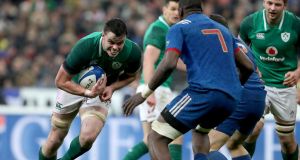 James Ryan in action on his Ireland debut against France at the Stade de France in February 2018. Photograph: Dan Sheridan/Inpho

History has proved that Warren Gatland is capable of anything when it comes to selecting a team. Making James Ryan his British and Irish Lions captain is not beyond the realms of possibility but throwing the 24-year-old’s name into the hat – as Gatland did Wednesday morning – came as a shock to the lock who these days leads by example rather than by duty.

“To be honest I haven’t heard that,” Ryan responded from Ireland camp in Carton House. “You’re the first person to mention that but, I mean, I’m not going to pay too much attention to that to be honest. I’m not thinking about any Lions stuff right now.”

It is worth noting that Gatland’s captaincy contenders could fill a goldfish bowl. But the idea of being selected in a pack alongside Maro Itoje, Sam Underhill and the Vunipola brothers to take on the might of world champion Springboks next summer in South Africa – all going well – can be cemented by what Ryan does during his second visit to Stade de France this Saturday.

Ryan’s Six Nations debut in February 2018 happened on a never to be forgotten Parisian evening when 41 carries by regimented ‘JoeBots’ led to Johnny Sexton’s match-winning drop goal; a strike that lit the touch paper for the greatest year Irish rugby has ever known.

“That was probably one of the best days of my career. My first Six Nations game and it was a start in Stade de France. It was a dream come true at the time, it was incredible.

“I was on the bench when Johnny knocked it over, so I missed, well I didn’t miss it, but I wasn’t involved in that famous build-up to the drop goal. It was some buzz after and that was probably the catalyst for a very successful year.

“My abiding memory is the big mill up at the end with all the lads jumping on top of each other and Dan Leavy jumping head first into the big kind of mosh pit, which was great.”

Speaking of Leavy, Ryan was extremely pleased to see his friend’s return from a vicious knee injury for Leinster last Friday at the RDS.

“I was so excited for him. I found myself smiling for the whole last 20 when he was on. Yeah, just under 19 months it has been – a long and hell of a ride for him – but I actually thought he looked really sharp. He didn’t look like somebody who had not played in so long.

“It is fantastic that he is back in the mix. I missed him even on a personal level, not being able to play alongside him every week, as I know how good a player he is. Having him back fit is only good news for Leinster and then Ireland.”

It is almost laughable that Leavy returns as the fourth choice Leinster openside behind Ireland starter Will Connors, Josh van der Flier, who travels to Paris in case of a Covid emergency, and the outstanding 21-year-old Scott Penny.

A repeat of Sexton’s heroics to secure a 15-13 victory over France two years ago will almost certainly not be enough to capture the 2020 Six Nations.

“We haven’t really talked about the bonus point,” said Ryan. “I think for these big days and these finals it’s important that guys don’t go into their shells. You’ve got to express yourself and you’ve just got to attack these days.

“This time it will be a bit different with no crowd and everything. I think France will be stronger than they were the last time I was there. I think they’re a team on the up, looking at their form in the Six Nations gone by, beating England at home, going to the Millennium Stadium and beating Wales, first time they’d won away in Cardiff in a long time and obviously beat them pretty comprehensively at the weekend again.

“So it’s a big one for us this weekend.”

Ryan is re-emerging as a leader in the international bubble having inherited the responsibility of lineout caller. It was Devin Toner’s job until Ulster captain Iain Henderson took over and Ryan Baird has also embraced this unforgiving task in a blue jersey. None of them are playing in Paris.

“We are trying to play quick and have real tempo in our attack. Our lineout mirrors that philosophy. We want to have real tempo at lineout time. We want the hooker setting early and the lineout in and out. So, all those little things are important.

“I’ve learned off a few guys as I came up. It is not just me, it is a number of guys feeding it, so I have enjoyed it and hopefully it will go well this week.”