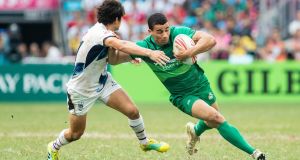 The Ireland Rugby Sevens team could qualify for the Tokyo Olympic Games for the first time in history as early as July of this year. And their chances of making it to Japan in 2020 could hinge on how England perform in the World Series event that takes place over this weekend in Singapore.

The 2019 World Series carries special significance as the top four teams will qualify directly for the Tokyo Games, and with just 40 points currently separating the top five teams it is all to play for with just three rounds remaining.

Should any of the top teams (USA, Fiji, New Zealand, South Africa) finish the Singapore event with a margin of 43 or more points ahead of the fifth-placed team in the standings – currently England – they will have achieved Olympic qualification for Tokyo with two rounds to spare.

That’s where Ireland’s interest lies. If England can put in a performance this weekend and over the next two rounds (London and Paris) to qualify for the Olympics through the World Series, they will not compete in the European qualification in July.

Scotland, Wales and England play in the Olympic Games as Britain, so if England can qualify directly the team will travel to Tokyo as a British side. That has been agreed with World Rugby and the International Olympic Committee.

The tournament in July will be run in Colomiers from July 13th-14th. As the World Series is still being played all of the teams France bound are not yet known. If England do not qualify directly, they will also play in the European qualifier and will be favourites to win.

But France have also been showing form at the highest level. With the Olympic Games due to be staged in Paris in 2024, the French have focused in on their Sevens programmes in the hope of making the podium in Tokyo but particularly for their home games in just over five years’ time.

All of the Irish squad are on Sevens contracts with the IRFU, although Ulster’s Enniskillen winger Robert Baloucoune was taken out of the programme to satisfy provincial needs in the Pro14 and European Champions Cup in the XV man code of the game.

Conversely fullback and wing Hugo Keenan, who has played with Leinster this season, was transferred to the Sevens format, where Buccaneers’ Jordan Conroy is fast becoming one of the stars of the game.

This season has been Ireland’s most successful Sevens campaign and next season the team will compete in the glamorous World Series in 11 countries between November and June. World Rugby will pay for most of the costs of the Irish squad’s 12 players and travelling backroom team.