In 1989 Ireland faced the Haka and paid the price

Ireland and the All Blacks through the years: Anderson’s famous stance well remembered 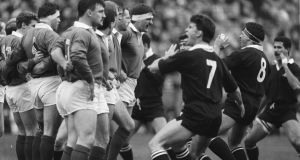 Ireland captain Willie Anderson faces up to New Zealand captain Wayne Shelford as the All Blacks preform the Haka at Lansdowne Road in 1989. Photo: Billy Stickland/Inpho

It was the last big rugby international of the decade. In early December, Scotland would thump Romania in a little-noted test in Murrayfield but this was the final prestige international of the 1980s: the world champions against the feisty crowd in green. Throughout New Zealand’s winter tour, competing teams had been struggling as to how to best respond to the ritual Haka. Under the captaincy of Wayne ‘Buck’ Shelford, the All-Blacks had elevated the performance of the Maori war dance to a mesmerising and sometimes menacing art form.

At Rodney Parade in October, the Newport players decided to ignore it, standing in a huddle behind the goal posts. Shelford simply took his team to the opposition goal line: it made it appear as if the home team was cowering in the heat of the chant. When Munster’s turn came, they decided to link arms and face their opponents straight on. For the international test, Ireland’s captain, Willie Anderson, and the coach, Jimmy Davidson, adopted the Munster stance but added their own dash of insurgency.

“I always said that we won the dance but lost the match,” Anderson would say years later.

“You have to not only match them in the haka you have to go toe to toe the whole way. In fairness it was Jimmy Davidson’s idea and I suppose he got a few…idiotic lieutenants to carry it out. And the atmosphere was …if you could have bottled it, you would have made a fortune.”

If it felt and looked spontaneous, that’s because it was. Anderson may have had a clear idea of what he was going to do but it wasn’t as if the Irish had had a full team meeting about it; they had a match to worry about it. Donal Lenihan had played in the Munster match so he thought he knew what was coming next.

“As Nick Popplewell was making his debut that day, I decided to stand beside him and link his arm in support,” Lenihan recalled in My Life In Rugby.

“I was halfway down the line to the left of Willie, who was standing right in the middle with seven men either side of him, when suddenly, and without any warning to the rest of us, he started advancing on the New Zealand players. Along with everyone else, I was looking across the line wondering, what the f**k is going on here. That’s why you started to see this V forming with Willie as the arrowhead, leading the charge. It ended up with him practically in Shelford’s face as the Lansdowne Road crowd went ballistic in response.”

It was magnificent theatre as Anderson, a gaunt and imposing figure, stood in the middle, apparently dragging his team-mates right towards the black shirts. Nick Popplewell’s memories are hazy for two reasons: he played New Zealand 10 times (including one victory in three Lions tests) and he left the field injured that day after just 20 minutes. There was no major planning of how the Ireland team would approach the ritual: it just sort of happened.

“When you get your first cap, so many emotions are going through your head that the last thing you are worried about is facing the haka, to be honest,” he says now.

“The theory was always that you always look at the white fella at the back because he doesn’t have a clue what he is doing so if you need to just de-stress, have a look at him making a twit of himself. I was to Anderson’s left, as far as I remember. You can’t hear anything in Lansdowne anyway. You are just thinking about the first couple of minutes and what you are going to be doing. What somebody is shouting in your ear doesn’t mean anything. I wasn’t really taking it in.”

New Zealand had started their tour on October 8th with a lopsided win against British Columbia in Vancouver. A half hour video diary exists of their fortnight in Ireland: every day seems foggy and drizzly and the film captures both the camaraderie and boredom of those long tours: hours on buses, card games, trivial pursuit, pub sing-songs. There’s a sense, though, that the players are keenly aware of their responsibilities as ambassadors for the All Blacks brand. Whether its meeting kids before games or touring factories or sightseeing, their mission was to behave well – and to win games.

“They were all social, decent people,” Popplewell says. “Playing against them…Jesus, tough as you like. Socialising: fantastic. Everyone took a drink at that time and that’s just how it was. They were just hard and had that aura about them.”

Popplewell would play 48 times for Ireland in a 10 year career but his debut was cut short when he broke two ribs. “Talk to Munster people and they’ll tell you I was out scrummaged. I just twisted and that was it. Bang. Bang. Nothing you can do about that.”

He spent the next hour in a state of disbelief as much as watching the game, cheerfully admitting that he remembers nothing of John Gallagher’s scintillating try along the left wing in the first half. It was a beauty, the full back coming at speed to collect a pass from Terry Wright and ghosting through the cover.

For Gallagher, the tour was something of a homecoming: his father was from Limerick, his mother grew up in Coleraine. He grew up in Lewisham before moving to Wellington to play rugby. It wasn’t long before he was on the national team radar. Even with that score, Ireland hung tight: it was still 10-6 in the second half when a Grant Fox try was cancelled after an extraordinary intervention by a ball boy.

Jim Fleming, the touch judge, had raised his flag after Sean Fitzpatrick, New Zealand’s hooker, crossed the line on his throw. Sandy McNeill, the referee, failed to notice. Play moved to the opposite wing where Kenny Hooks, the Irish wing – winning his second cap here some eight years after his debut – made a hugely brave try-saving tackle on Craig Innes which left him unsteady on his feet and in need of attention. The play continued while the crowd tried to alert the referee to the raise flag. In the next phase, Fox looped past Ireland’s cover to score in the corner. Garrett Tubridy, the young ball boy asked Fleming, still standing with his flag raised three minutes later, why he didn’t just run over to the referee.

The official said that he wasn’t allowed to: protocol and all that. So the 13-year-old took matters into his own hands and ran out to alert McNeill. After a few moments of consultation and confusion, he disallowed what would have been Fox’s first ever New Zealand try. It further buoyed the crowed but also just prolonged the inevitable. It was still 13-6 after 70 minutes. But Wright and Shelford both crossed the line with the Irish team exhausted and the mood of rebellion invoked by Anderson well and truly spent.

“That was always the way,” says Popplewell.

“They were as good as professional at that stage. You might last 50 minutes and we were always killed in the last 15 minutes. You didn’t have rolling substitutes. The beauty of the Lions was that we were probably as close to being as fit as them so that factor was negated. With Ireland, they were just a stronger side. Then you had the arguing factor – they were so good at that. Referees always gave them any rub of the ball going and you had Fitzpatrick basically refereeing the match anyway. That’s the way it was. So when it came to playing Ireland they were – quite rightly – bloody arrogant.”

Popplewell was still there for New Zealand’s next visit to Dublin, in 1997. The haka has continued as an indelible element of All-Blacks culture but no team since has got as up close and personal as Anderson’s Ireland.