Eddie Jones staring into the definitive phase of his England tenure 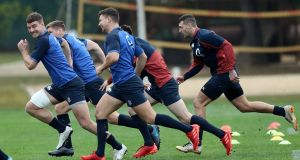 And so we enter the third act of Eddie Jones’s stint as English rugby’s impresario. For the first couple of years it was all about rebuilding his cast’s self-belief. Then came the concerted push to conquer the world which fell, frustratingly, just short. And now? In some ways international coaching’s greatest showman is entering the definitive phase of his tenure, commencing this weekend in the cavernous amphitheatre that is the Stade de France.

Because if England come flying out in Paris as if they have been fired from a glitter-filled cannon, it will be some achievement. There has been scant time to re-set everyone’s horizons and numerous off-field distractions, not least untimely absence of the Vunipola brothers and Anthony Watson. Normally, too, Jones does not hang around in jobs this long, having either fallen out with his employers or because the grass is greener somewhere else.

On top of all that, France are potentially very dangerous, possessing a spectacular backline who, given some quick ball, could out-dazzle the Moulin Rouge’s finest. It will be a proper test, not just of English sang-froid and the mettle of their debutant full-back George Furbank but Jones’s ability to refresh the parts other coaches cannot reach.

Complete a grand slam between now and mid-March and the Wizard of Oz’s magic touch will be indisputable. Flatter only to deceive and England will have reverted to another familiar “boom or bust” cycle, still not quite the real deal.

Clearly such things are not entirely down to Jones alone but there remain two Englands – the team who brought the All Blacks to their knees in the World Cup semi-final and the bunch who imploded tactically the following week. Every team has this split personality buried deep within: the difference with the great sides is how seldom they let it show.

Consider England’s record under Jones. Overall it is more than handy: 39 wins from 50 Tests. But now remember how they blew up in last year’s Six Nations, having blitzed Ireland in Dublin in round one. One minute they were carving Les Bleus to pieces at Twickenham, the next they were letting a 31-0 lead slip against Scotland. How to reconcile the All Black masterclass with the Springbok drubbing? Something, somewhere does not entirely add up.

Until this week no one within the England camp has been in much of a rush to supply a public postmortem. Perhaps unsurprisingly, the World Cup squad member to offer the best insight was Willi Heinz, the Gloucester scrum-half who did not play in the final after pulling a hamstring against New Zealand. “We probably made some errors early on in the game that fuelled South Africa.

We got stuck in our own half a little bit and potentially that played into their hands. Were we as adaptable we needed to be in those moments? Did we make brave decisions when things weren’t going to plan? Did we have that alternative plan to go to or some other plays you need the foresight to call before things really turn against you? Those are the conversations we’ve been having.”

Such shortcomings have extra resonance because Jones spent much of the last four years wrestling with that same problem. England can be great on the front foot but less good at changing the record, particularly under pressure away from home, when circumstances require it. There was another example in the defeat to Wales in Cardiff last year when, as Jones noted in his autobiography, “we didn’t react quickly enough to change a strategy that wasn’t working.”

At some stage this becomes less a collective mindset issue and more about selection. England have a number of genuinely world-class players but in certain key positions – tight-head prop, number eight, scrum-half, inside centre, full-back – they need to unearth a couple more. These are big weeks, then, for Will Stuart, Lewis Ludlam, Ben Earl, Ollie Devoto and Furbank. Step up now and, with Maro Itoje, Tom Curry, Sam Underhill, Mako Vunipola, Kyle Sinkler, Owen Farrell, George Ford, Henry Slade, Joe Cokanasiga and Elliot Daly still around, England will hope to be more than competitive at the 2023 World Cup.

That still leaves a vacancy - with Ben Youngs now in his 30s - for the most vital missing link of all: an intelligent, skilful, consistent number 9 who helps those around him to remain calm and make better decisions. It explains why Jones has retained the wily Heinz, who could be heard muttering about the 38-year-old Roger Federer’s longevity this week, in his matchday squad at the age of 33.

When you start thinking along those kind of lines it becomes easier to see why whizzy 9s like Dan Robson have not found much favour and why Richard Wigglesworth was still being picked by England at 35. It is also why Exeter’s Jack Maunder, capped once in Argentina in 2017, remains part of the wider EPS picture and his up-and-coming younger brother, Sam, has just been named as England’s U20s captain. The hunt is on for thinking red rose players, not just gym rats.

For now, though, it is all about bounce-backability. The last scheduled England-France fixture in Japan fell victim to a super typhoon; this time Jones wants his players to be the elemental force. In some respects it will require an element of mind over matter - and not just from those Saracens players still coming to terms with their club’s very public salary cap-related nosedive. This is the first year the English Premiership campaign has stretched deep into June, with the subsequent tour to Japan involving two Test matches in July for some. With the demands - mental and physical - of the World Cup still lingering and the fridge door calendar offering little immediate relief, it is an impressively single-minded player who is jumping out of bed at 6am with a soaring heart.

Added to that is the oldest problem in the Six Nations book: everyone wants to raise their game whenever England ride into town. France may have a lean record at Twickenham but in Paris they have beaten Les Rosbifs on two of their last three visits. Les Miserables? If England head back home across the Channel victorious, Jones’s smile will be the broadest of the lot.