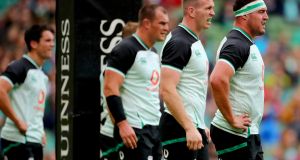 Ireland will field a much-changed side from last Saturday’s starting XV for their 29-10 win over Italy, for their next warm-up game against England at Twickenham on Saturday week, says head coach Joe Schmidt. Photograph: James Crombie/Inpho

Joe Schmidt has confirmed that the Irish coaching staff will most likely prune another two or three players from the 43-man squad prior to their departure on Wednesday for an eight-day warm-weather training camp in Portugal.

The Irish head coach has also confirmed that Ireland will field a much-changed side, featuring at least 10 or a dozen alterations from last Saturday’s starting XV for their 29-10 win over Italy, for their next warm-up game against England at Twickenham on Saturday week.

The pruning process looks almost cruel from the outside. With Ultan Dillane and Rory Scannell having been cut before that Italian game, and with others likely to follow this week, Schmidt conceded it is “harsh”. In common with all coaches, it’s the aspect of the job he clearly hates the most.

Asked if he would “fancy” naming his 31-man squad today, a la Eddie Jones, Schmidt answered wryly: “I do not fancy it any day, to be honest. Probably four years ago it was one of the most difficult tasks I have ever really had to put my mind to because I know that team and how much the players want to get to a World Cup.

If we think we do need to trim the squad a little bit, as harsh as it will be, then collectively we will make those decisions

“It is for Ireland probably more than some other teams where we need to perform,” he added in reference the burning desire to at least go beyond the quarter-finals for the first time. “This year, from the very start of the year, that has had to be the target. It means the players want to be at the top-tier tournament in the world.

“I think I could name certainly 20, maybe a few more. But the coaching staff will meet tomorrow morning after having had a look at the game and have a chat about probably who we think is putting their foot forward in the best possible manner, and also look at guys who were maybe chasing their tail and need to demonstrate a little bit more.

“If we think we do need to trim the squad a little bit, as harsh as it will be, then collectively we will make those decisions. Individually I will make contact with, and hopefully have time, to meet with players. If not, then it is that phone call they do not want to receive and I do not want to really deliver.”

After confirming that Joey Carbery did not suffer a fracture to his left ankle, Schmidt also dismissed the notion that the outhalf was either too brave for his own good or injury-prone.

“He was reasonably close to the tryline, he got both his arms under and was in a crouched position and he just got hit sideways and kind of got his ankle underneath him. Now, that could happen to anyone.

“Joey has not had the best of luck and sometimes you can have that run. You know, Tadhg Furlong had that run for a couple of years where he didn’t play a lot and then he got into a rhythm and he’s fine. So hopefully, Joey will get through this ankle injury.

“Hopefully, it’s not too bad and it might only be that he’s off his feet for a week and he’s back training and potentially still in the mix for England. If not for England, the Welsh game after that.

“You always worry about injuries in these games, full stop, across the board. It’s so important to have a depth in your squad going to a World Cup. That’s been a bit of a four-year project for us and it’s certainly been a priority in this 12-month window where we’ve tried to aim up at the World Cup.”

Looking ahead to Ireland’s next warm-up game against England, Schmidt also confirmed: “There’ll definitely be a number of changes. I’m not sure there will be 15 but I’d say 10 will be a good starting point and it could be more.

“It will depend a little bit on how guys come through this. Potentially what we want to see more of guys, if we’ve already made our decision on someone they might just go Wales, Wales and in, but you’ll certainly see a number of changes.”

Jones is due to announce a 31-man English squad today for the World Cup, while reserving the right to change his mind, after England beat Wales 33-19 at Twickenham on Sunday. Those two sides meet again in Cardiff next Saturday.