Outhalf was the star turn for 49 minutes, but concern now is his wellbeing for World Cup 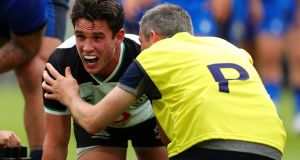 Joey Carbery receives medical attention prior to being taken off during the Guinness Summer Series match between Ireland and Italy at the Aviva Stadium on Saturday. Photograph: Dan Mullan/Getty Images

In what represented something of a trial for a host of players, ironically it was the performance and premature departure of one of the few nailed-on World Cup squad certainties which lorded over this predictably low-key opening warm-up.

Joey Carbery was the star turn for the 49 minutes he was on the pitch, the variety and inventiveness of his kicking, passing and running game illuminating the changeable, squally conditions. His departure cast a pall over the ground which little about a scrappy, stop-start final half-hour alleviated.

Get well soon, Joey, brooded the crowd. Even though he may ultimately be Johnny Sexton’s understudy in the big ones, Carbery’s wellbeing was undoubtedly the abiding concern of almost all present.

Ireland’s efficiency at ball retention and multi-phase recycling has been at the cost of a developed kicking game, but here Carbery’s array of crosskicks, chips and grubbers were on full display.

Strikingly, the crosskicks were a regular part of Ireland’s exit strategy, with Andrew Conway the target on five occasions. Twice he claimed the ball brilliantly, and on another Chris Farrell gathered the loose ball to lead a breakout.

Granted, on the first occasion this exit strategy didn’t work, it led to Italy’s first try after Conway was initially penalised for playing the ball on the deck, and Ireland’s soft maul defence won’t have pleased Simon Easterby. On the other hand, it led to prolonged Irish defensive sets.

However, when Carbery backed up one of Conway’s takes on the right wing by chipping deftly for Dave Kearney a couple of rucks later, the winger’s gather and kick and chase led to a five-metre scrum at the other end of the pitch and eventually Ireland’s third try.

No matter the position on the pitch, Carbery had other deft grubbers into space, and it was a tactic also explored by Jordan Larmour and Carbery’s replacement, Jack Carty.

This was all a relatively new tactical shift and, in saying he was “really happy with our first half, to be honest”, Joe Schmidt revealed: “I felt there was good variety in what Joey did. We gave Joey lots of freedom to run the game as he wanted to run it and I felt he did it really well. So that answered a question for us.”

Yet although Garry Ringrose occasionally stepped in as first receiver and Jordan Larmour did well in the outside channels, giving two try-scoring passes, this game perhaps furthered the case for giving Carbery more of a role in tandem with Johnny Sexton as an auxiliary playmaker.

As for the many apparent individual trials, you wonder how much Schmidt and co can truly learn from this affair.

Although he noted that Jack Carty “struggled for a bit of rhythm”, the coach expressed his pleasure with pretty much everyone, beginning with praise for Andrew Porter and Jack McGrath.

Ireland had five put-ins during that half, steamrollering the Azzurri pack to win four penalties

However, as suspected might be the case given the starting Italian front-row had just 16 test caps and featured a debutant 21-year-old, Marco Riccioni, at tighthead, Ireland dominated the scrums, especially in the first period.

Much of the damage seemed to be done on Riccioni’s side of the scrum, so how much credit does Jack McGrath earn for that?

Ireland had five put-ins during that half, steamrollering the Azzurri pack to win four penalties, which helped give the set-piece territorial footing for each of the three well-carved first-half tries.

McGrath could miss out if, as suspected, a third tighthead who can pack down on the loosehead side of the scrum is selected. Ironically, McGrath was replaced by John Ryan at half-time so Andrew Porter could prove his credentials for packing down on both sides of the scrum. This cannot be described as a rip-roaring success.

Ireland only had two put-ins in the second half and, by then, in another pre-ordained strategy, Conor O’Shea had introduced a prop, Federico Zani, at hooker to see if his versatility can provide the Italian coach with some elbow room in his 31.

The more experienced Andrea Lovotti and, just before Ireland’s 54th-minute put-in, Simone Ferrari were also introduced, whereupon Porter was turned inside and hit the deck before Luke McGrath cleared the ball away.

Ireland’s scrum on their second put-in held up better, but by that point Healy had replaced Porter. In the interim, the Italian scrum plundered a penalty while Devin Toner was a blood replacement for Jean Kleyn. So how much can be read into that?

So many apparent outcomes. But so many variables.

Kleyn certainly did his case no harm with a typically grafting, physical effort featuring 16 tackles. Only Tommy O’Donnell (17) made more, and the flanker missed none. In addition to his dynamic carrying, O’Donnell was still first to the breakdown and making clear-outs in the 79th minute. Rhys Ruddock and Jordi Murphy also had industrious outings, while Tadhg Beirne won two trademark breakdown turnovers off the bench as a blindside.

Both try-scoring passes were by Larmour, who had a quietly efficient game at fullback

Aside from Carbery, Chris Farrell caught the eye with some big hits and good carries, notably one from off the top lineout ball, and some deft hands, particularly his pull back for Carbery’s try.

Each of the wings were deserving of close-range, corner flag finishes by dint of holding their width and good hands inside them. Both try-scoring passes were by Larmour, who had a quietly efficient game at fullback. Schmidt praised his positional play, which enabled him to gather all the kicks that came his way, and Larmour was also alert and sufficiently quick on the turn to twice save tries.

Larmour appears to be the primary alternative to Rob Kearney at fullback, and with Keith Earls and Jacob Stockdale nailed on, for all their good work here, it’s hard to see how both Conway and Dave Kearney can make the final cut.

1 GAA players spend just 2.5 seconds within 2m of each other during play
2 How a GAA club sprang up in east Belfast over Sunday breakfast
3 Drew Brees apologises after LeBron James leads backlash to anthem comments
4 ‘Why do you need the money now?’: Schalke apologise for ticket refund questions
5 Connacht continue player hunt as six academy graduates promoted
Real news has value SUBSCRIBE

The Irish Times’ shutdown sports quiz: Part one 16:00
Rafa Nadal says he would not travel to US Open in present circumstances 15:09
Premier League to allow five substitutions per team when games resume 14:34
‘Why do you need the money now?’: Schalke apologise for ticket refund questions 13:50
Shane Long signs new two-year deal with Southampton 12:46
Here is your handy guide to sport on television this week