All Blacks pick all the big guns for England clash 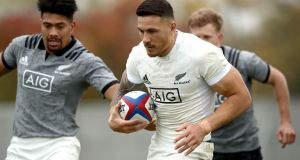 Sonny Bill Williams of the All Blacks during training at The Lensbury ahead of their meeting with England at Twickenham. Photo: Phil Walter/Getty Images

New Zealand have picked their strongest available team, including a centre pairing of Sonny Bill Williams and Jack Goodhue, for Saturday’s clash with England.

The hard-running Crusaders duo will start together for the All Blacks for only the second time after Goodhue recovered from glandular fever, forcing Ryan Crotty on to the bench.

Prop Joe Moody suffered a cut eye in training, so Karl Tu’inukuafe takes his place in the front row of a side led by number eight Kieran Read and directed by Beauden Barrett at outhalf.

“We’re blessed with some very good midfielders at the moment. It doesn’t matter which one you play we’ve just got work out what combinations really gel well together and what we can do with the bench.”

The All Blacks will wear poppies on their jerseys as the Test falls on the centenary remembrance of Armistice Day.

In an ominous warning to England, Hansen has revealed that his world champions are looking to make a statement at Twickenham.

“We know we’ll be up against a very determined and well-coached English side,” Hansen said.

“They’ll have gained a lot of confidence from their win over South Africa and be keen to make a statement in front of their passionate Twickenham home crowd.

“However, for us it’s about making our own statement. To do that, we’ll need to bring our own intensity and accuracy to an even higher level throughout the game.

“It’s a great opportunity to assess where our game is at and we’re really looking forward to it.”

1 Man City to investigate Kyle Walker over lockdown sex party
2 Ken Early: Mick McCarthy II was no blockbuster, more of a flop
3 Ken Early on Mick McCarthy II; racing will endure even the harshest criticisms
4 Horse racing is in the doghouse, but remains a magnificent triviality
5 Cigala caught in the crash as cycling’s Zwift League series heats up
Real news has value SUBSCRIBE