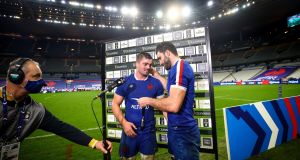 France’s Gregory Alldritt is presented with the Six Nations Player of the Match award by his captain Charles Ollivon. Photograph: Inpho

Leaped over Andrew Conway and offloaded despite Robbie Henshaw’s embrace to spark Ntamack’s try, which more than atoned for a sin binning after deliberately slapping the ball into touch when Hugo Keenan was stretching for an early try. Rating: 6

Bumped by Henshaw leading up to Ireland’s second try. Needs the game to open up for him, unlike Teddy Thomas, the hamstrung wing he replaced, who can tear your heart out in a telephone box. So it could have been worse. Rating: 6

Sensational offload leading up to the penalty try, equally created by Jacob Stockdale’s inability to perform the basic fundamentals of a fullback. The most dangerous centre on the planet was contained until he wasn’t on 70 minutes. Rating: 7

Came into the team and outplayed Bundee Aki with nine hard as nails carries, for 24 metres, through a hectic midfield. Rating: 7

Slick footballer’s touch to scoop up possession, speed away from Andrew Porter and Conor Murray to create Dupont’s try. Constant threat down Conway’s wing where he looked almost unplayable, offloading at will. Rating: 8

Killer finish made it 22-13 on 43 minutes. Beautiful chip, chase, offload for Vakatawa’s score, having recovered from a late Will Connors hit into his back, to kick the important goals. Calm, authoritative and only 21. Rating: 7

Bit of everything from him. Assist for Ntamack try came via a sixth sense to run the quickest possible line to where the offload is always waiting. Slick try was, again, down to an innate ability to pick an inside line that demands man marking. Rating: 8

Conceded an early scrum penalty to Porter - which looked harsh - but the best ball carrying prop on show by some distance. Rating: 7

Right under Stuart Barnes’ nose he gave up a penalty that allowed Johnny Sexton and 14 man Ireland to make it 14-13 but out-tackled and out-muscled most opponents. Rating: 7

Not put under unnecessary strain in a pack that physically over powered their Irish visitors. Rating: 6

Coughed up a very kickable penalty on 24 minutes that saw Ireland take a 10-7 lead but he had plenty to do with the bullying of Ireland’s lineout, rucks, mauls, you name it, he was a constant nuisance. Rating: 8

Try saving tackle on Sexton to go with an enormous and pounding tackle count (16). Immense power unable to be matched by anyone in the Irish pack. Rating: 8

Caught Sexton with an accidental swinging knee and denied a try by Caelan Doris’ illegal tackle before being forced off on 33 minutes. Rating: 5

Brilliant leader in the thick of all the physical battles and unsurprisingly near the top of the tackle count with a super athletic display. Rating: 8

The clean rip on CJ Stander led to penalty on the stroke of half time but he would have loved the sight of Sexton spurning the three points. Made a ridiculous 24 tackles. Rating: 8

The French reserves made a bruising impact in contrast to an Irish bench that was gaining experience. Dylan Crétin robbed the ball off Connors to save a try on half-time. Rating: 7

The good times are back. Still a beatable team prone to error but Fabien Galthié has the players and time to launch a genuine World Cup bid in 2023. Rating: 7