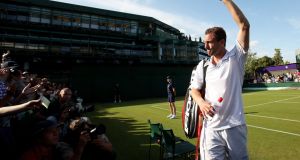 Conor Niland of Ireland waves to the crowd as he walks off court after losing his first round match to Adrian Mannarino in 2011. Photo: Getty Images

As great as it is, Wimbledon can blow cold, feel like a wilderness, an alien tournament that blooms every year for two weeks at exactly the same time. Like New York Fashion week or the Chelsea Flower Show, demanding world attention, Wimbledon is one of the ‘it’ summer events but always without an Irish accent.

As much as it heavily impinges on the sporting consciousness, Ireland has been largely confined to gawking in and admiring the finery. New York and Chelsea have more central Irish players than The All England Club in July.

Those first flashes of grass are mackerel appearing on the headland and fishing rods yanked out from under the stairs or the corner of the garage. So too racquets for the tennis feeding frenzy.

The courts fill. The fortunes of the big names and dark horses are watched from Westport, Inchydoney and Portstewart but always at an arm’s length. Even the BBC, snuggling into sitting rooms everywhere, can’t fix that, can’t fix a 128-player draw with no Irish skin in the game.

For the first few days it never changes and enthusiasm blows around the walkways that thread between the courts great and small as 35,000 to 40,000 fill the club each day. People flock to Court Seven or Court 12 to see their players: the Bolovian who once worked for a cartel; the Latvian Mensa genius; the Serb with the troublesome father; the Moroccan who was a camel herder; the Israeli soldier; the Cypriot who supports Apollon Limassol; the Kazhak who is in the top 40 but you’ve never heard of him (Andrey Golubev); the player from Luxemburg: population 613,894. They don’t always pan out to be true.

You hear them all. But you never hear of the Irish player on Court Seven, whose second language is English. You never get the Irish player, who gave up Gaelic football for a life on tour. Because it never happens. Our disappointments are wide and varied and relative.

But on a Tuesday in 2011 on day two of the tournament, Conor Niland prepared himself for a scheduled first round meeting with Frenchman Adrian Mannarino. A Limerick man was breaking time-honoured convention.

Yes it was novel, an Irishman in the main draw on the last court of a string of four that backed onto Centre Court on one side and court Number One on the other, all four of them – 14, 15, 16 and 17 – sandwiched between two of the most famous stadia in world tennis.

Niland played a level just off Broadway, just off the top 100 ranking that would have given him a comfortable lifestyle, touching on the glamorous and automatic entry to all four Grand Slams. The 29-year-old had soldiered largely alone for years on the world circuit, chasing points, building a ranking. Wimbledon was reward for his years in the trenches.

The word had gotten out and on a blustery day with passing cloud and sunshine a modest throng of Irish supporters settled into the seating around the court. It was first come for the free court. No tickets, no pre-booked seats. A few tricolours fluttered around the pristine surface, those at the front almost within touching distance of the two players.

Niland had beaten higher ranked players many times before. He had been ranked as high as 129 in the world and easily the most consistent performer of his generation of Irish tennis players. But it was the first time he had qualified for Wimbledon in what was becoming the best year of his career.

It was a storied 2011 and after London he would travel to New York and also make the main draw of the US Open, where food poisoning following a New York pizza the previous night would force him to default against Novak Djokovic in the first round.

But Wimbledon of that year will go down as the one match Niland knows was a kind of aberration. More than a disappointment. Not only did he climb far above his world ranking over the five sets but experienced the placing of one foot solidly in the second round and a walk onto Centre Court.

All well and good with the biggest cheque of his career but the second round on that side of the 2011 draw would present a bigger prize. The winner would face the then 16-times Grand Slam winner and Wimbledon champion Roger Federer. Niland was playing Mannarino for a rare lifetime moment of time on a court with the best man to ever play at Wimbledon.

It was a boxer being given a shot at a world title, an opportunity on the grandest stage in the sport to upstage a revered master of the game. To beat Federer on Centre Court was a dethroning, a deposition of tennis royalty and for Niland a prize of everything to gain and nothing to lose.

It was a cash cow either way, a puncher’s chance to cause history and an opportunity for the gaze of the world to for once fall on an Irish tennis player in the main draw. There could be no more preferable second round match for either Niland or Mannarino, no name that could inflate the importance of the meeting more than that of Federer.

The match began and fluctuated wildly with the ranking disparity not visible. Neither player could put distance between the other, although Niland took the first set after dominating with his serve and threatening that of Mannarino. Earning eight break points he closed out the set 4-6. In the second set the French player reversed the trend and began reading the Niland serve. Six service break points and 42 minutes and he had levelled the match 1-1.

Mannarino’s lefty kick serve and his flicking backhands had Niland scrambling. But again he threatened the French delivery before falling away on a tiebreak leaving Mannarino to lead 2-1 in sets.

Niland understood that to stay in the match he had to generate momentum and place doubt in his opponent and again he succeeded on forcing another turn, taking the fourth set 4-6 and the match to two sets each.

In most uneven contests the desired outcome is to bring the match to a shortened version. Stronger players win over greater time but the Irishman had taken his opponent to a one set shootout.

With neither player giving ground, it grew into one of those classic Wimbledon duels. Mannarino, thinking he had pulled a sweet draw seemed nervous and knew that with four sets played there was little separation.

It was Niland who shot in front by breaking the serve of Mannarino. Then he did it again, causing an audible ripple around the small Irish gathering. Possibilities expanded as Niland moved to a 4-1 lead in the fifth set.

The better player, the more experienced, the less hassled, the more consistent, he took a further baby step towards a spar with the tennis god when he led 30-15 in the sixth game and was 4-1 up in the set.

Maybe then that image of Roger’s gold braided blazer and monochrome sneakers walking towards him in two days’ time, hand outstretched, began to weigh on Niland. He stopped going for his killer shots. He began to play a game of not losing, of cosying his scorecard as golfers try to do to the 18th hole. Making no mistakes meant making no winners.

Steering the match home was risk free but also an invitation and Mannarino took ruthless advantage. From 4-1 up and in charge of the match Niland, by increments, lost the next five games in a short episode of carnage, the match falling from him 4-6, 6-4, 7-6 (9-7), 4-6, 6-4.

“It’s something I still think about quite a bit I suppose,” Niland said some years later. “The fact I was almost on Centre Court playing Federer.”