American gymnast enjoys the largest victory of her career in Stuttgart 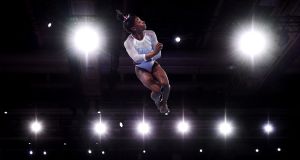 Simone Biles of the USA competes on the Floor during the women’s all-around final during the FIG Artistic Gymnastics World Championships in Stuttgart. Photograph:Laurence Griffiths/Getty Images

Even Simone Biles has trouble wrapping her head around just how good she has become. On Thursday night, just after she secured her fifth all-around world championship – in what could reasonably be considered the least suspenseful international title event in all of sports this year – Biles was asked to step back and consider the heights she has scaled in the field of gymnastics.

“I don’t know; I feel like it’s not me,” Biles said. “Sometimes I wonder how I do it. I feel like it’s just, like, not me. I wish I could have like an out-of-body experience to witness it because sometimes I think I’m going crazy.”

Watching video replays of her performances – the types of clips that have spread virally on social media in recent years, transcending the world of gymnastics, delighting hard-core fans and casual spectators alike – does not give her any more clarity.

Biles finished Thursday’s all-around competition with a score of 58.999. Her margin of victory – 2.1 points – was the largest of her career. Tang Xijing of China finished in second place, and Angelina Melnikova of Russia was third.

The gold medal was Biles’s 22nd medal at the world championships (16 of them gold), leaving her only one behind the career record held by Vitaly Scherbo of Belarus. She already has the women’s record for medals and is expected to claim the overall record by the time the championships come to a close this weekend. “Yeah,” Biles said of the medal count. “It’s a lot.”

Biles was not particularly enthused about her performances on Thursday; she said she played it safe, by her standards, in a number of circumstances. But the crowd at the arena nevertheless revelled in them. She was the only gymnast left competing when she stepped out for her floor exercise, and a hush fell over the arena as she settled into position.

Right away, Biles unleashed her parabolic, triple-twisting, double-somersault pass. Even as her momentum carried her slightly out of bounds, the move inspired appreciative gasps and raucous cheering from a crowd that had up to then limited itself to polite, supportive applause for the carousel of competitors that afternoon.

And at the conclusion of her routine, after several more explosions off the ground, she unveiled a sly exclamation point: Posing on the mat, she stretched out her right arm and pretended to drop a microphone – a mischievous flourish she adopted on a whim after a late night conversation with her team-mate MyKayla Skinner.

That Biles could sound so lukewarm about her performance and still waltz away with her fifth all-around world championship speaks to how far beyond the competition she has surged. She won four gold medals at the 2016 Olympics in Rio de Janeiro and appeared to be an athlete at the summit of her powers.

Instead she has continued to ascend, adding new skills, altering long-held perceptions about what is possible in a gymnastics arena and leaving observers of the sport wondering how much higher she can go.

“She is absolutely the best I have ever seen,” Liang Chow, the coach of the Chinese team, said. – New York Times