Applicants with relevant proposals can apply for funding from schemes totalling €1.3m 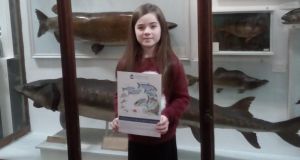 Maisy (8) from Lusk, Co Dublin, was the winner of the 8-11 category in the Salmon of Colour competition to mark International Year of the Salmon.

A new funding scheme of more than €1.3 million is now available to angling clubs and community groups, according to Inland Fisheries Ireland (IFI).

By far the biggest benefactor of the funding is the Salmon and Sea Trout Rehabilitation, Conservation and Protection Fund, with €1 million set aside to protect these species. This year, the emphasis will be placed on fish passage improvement and spawning enhancement.

Now in its sixth year, the Midlands Fisheries Fund of €50,000 is money created from permit income in the midlands region. Projects to benefit will include river bank protection, control of invasive species and improvement of fish habitat.

Suzanne Campion, head of business development at IFI, said: “We are committed to realising the potential of the fisheries resource from a social and economic perspective but also to protecting it for future generations to enjoy.”

To download an information booklet and submit an expression of interest, visit fisheriesireland.ie.

Applicants must apply through an expression of interest form to progress to a full application, which can be submitted up to and including closing date of Tuesday, February 25th.

Two young artists have been selected as winners of the the Salmon of Colour colouring competition to mark the International Year of the Salmon.

The event, which ran throughout last summer, attracted more than 1,000 participants with artists asked to colour in the designated image of the life cycle of an Atlantic salmon.

Maisy, aged eight, from Lusk, Co Dublin was selected as winner of the eight-11 category, while Molly (12), from Clonsilla, Co Dublin, scooped top prize in the 12-14 category. The winners received a €100 voucher for the Natural History museum shop and a private, guided tour of the museum, which is part of the National Museum.

Museum spokesperson Lorraine Comer said: “The competition had a large uptake and we would like to congratulate all of the participants involved and we look forward to similar activities in the future.”

In addition to the colouring competition, IFI and the National Museum partnered on a one-day Fishy Fun event in July which engaged the general public around the fisheries resource and the importance of its conservation through a range of interactive activities for International Year of the Salmon.

Still we await the first Atlantic salmon of the new year to rod and line. At time of writing, the Drowes in the northern region, Currane in Waterville and the Killarney Lakes have yet to register a fresh fish.

On a brighter note, each of the aforementioned fisheries report catching plenty of kelts, which bodes well for the future.

Last year, Michael McCann of Templeard, Derry, caught and released the first salmon of the season in the garden pool on the river Lackagh in Co Donegal on opening day, January 1st. The salmon weighed about 5lb and was taken on a single barbless hook.

The 89th annual general meeting of Co Wicklow Anglers’ Association will be held in the Royal Hotel, Bray, on Monday, February 3rd at 8pm. All members are requested to attend and to remember to sign the roll.

Show me the medals: Ireland drops one place in Tokyo Olympic predictions 14:15
Dana White: Conor McGregor to fight Dustin Poirier again in July 13:12
Simon Zebo is heading back to Munster next season 13:52
Seedorf wants to stop players covering mouths while talking 11:44
Liverpool leaning on Salah more than ever right now 11:20