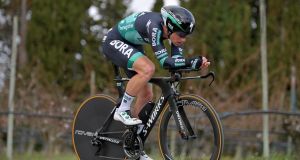 Confidence growing after he notched up victory on stage four of Paris-Nice this week, Sam Bennett will use the remaining stages of the race to continue to build form in advance of the Milan-San Remo Classic. The prestigious one day race, won by Sean Kelly in 1986 and 1992, will take place on Saturday week. It is one of the most important events on the calendar and traditionally goes to a sprinter who can survive the tough undulations inside the final two hours of racing.

Bennett’s Bora-hansgrohe team is set to be led by triple world champion Peter Sagan but the Carrick-on-Suir rider’s strong form means that his squad will keep an open mind on his chances. Bennett has notched up sprint victories in each of the three stage races he has competed in this year, namely the Vuelta a San Juan, the UAE Tour and Paris-Nice. These triumphs allied to his three stage wins in last year’s Giro d’Italia prove he can beat all of the top sprinters in the sport; if he can stick with the other contenders heading into the finale of Milan-San Remo, he could get his chance.

While Bora-hansgrohe wouldn’t comment officially on Bennett’s pecking order in the race, The Irish Times understands that if things play out in such a way as to put him in contention, that he may get his chance. That will depend on two factors, namely how well Bennett fares on the day and also how Sagan’s own race plays out.

Sagan has thus far shown he is a better Classics rider than Bennett but the Irishman is arguably faster in the sprint. If both are present in the finale, one possible tactic by Bora-hansgrohe would be for Sagan to make his move on the final climb, the Poggio, and for Bennett to swoop if things come down to a select bunch sprint.

Bennett didn’t dig deep in Thursday’s time trial at Paris-Nice, rolling in three minutes and six seconds behind the winner Simon Yates. The remaining stages head over mountainous terrain, making sprint finishes extremely unlikely. However they will enable him to continue to build towards Milan-San Remo, a race which is one of his biggest career targets.

In other news, double world champions Katie-George Dunlevy and Eve McCrystal plus Martin Gordon and Eamon Byrne finished second in the new tandem team sprint test event on day one of the paracycling world championships in Apeldoorn, the Netherlands.

The tandem pairings represent two of the seven Irish bikes in action at the worlds, which began Thursday and runs until Sunday. Also in action will be MC2 riders Chris Burns and Colin Lynch, WC3 rider Richael Timothy, MC4 competitor Ronan Grimes and the tandem pairing of Peter Ryan and Sean Hahessy.