Sonia O’Sullivan: minor tremors and other culture shocks in Japan 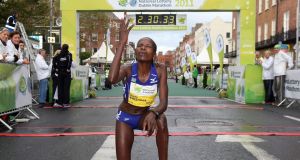 Helalia Johannes: the former Dublin Marathon winner from Namibia was first across the line in Nagoya in a time of 2:22:25. Photograph: Cathal Noonan/Inpho

I was brushing my teeth in the hotel room on the first night when everything started to shake. Or did it?

The next morning it seemed to have gone entirely unnoticed among the locals, or maybe just lost in translation as I tried to figure out was it all just a dream.

Everyone has their own experience of a culture shock, and a minor earth tremor is just one of them. There is certainly nowhere else in the world quite like Japan.

It’s been 16 years since I last visited, and when the opportunity arose to attend the Nagoya women’s marathon last weekend I was looking forward to exploring a little more than when last in Japan as an athlete, when you don’t get to see much more than the airport, hotel and race venue.

The Nagoya women’s marathon, suitably for Japan, is one of the biggest of its kind in the world, a highly competitive race at the front. It includes a mass of some 23,000 women of all ages and abilities. There was a time limit of seven hours, and like any big city marathon the streets were shut down for the day.

Nagoya felt entirely new to me, even if made a little easier with Google maps, which didn’t exist back in 2003. On arrival I was fascinated by the number of bikes; it seemed everyone had one. I also enjoy exploring by bike but, unable to find a rental, had to settle for the hotel bikes parked outside that you could take out for four hours at a time.

I’d packed my cycling gear and Garmin thinking I might get out for a proper cycle, only these were more like shopping bikes: a basket on the front, a friendly tinkling bell, squeaky brakes, and there wasn’t much manoeuvring of the saddle either, so everything was low to the ground.

Most people rode their bikes along the footpaths, weaving both ways between the pedestrians. At first it felt like a minefield, only with a gentle tinkling of the bell a path was quickly cleared. There were a few close calls but the bikes just seemed to glide along, everyone smiling and waving and waiting patiently at the traffic lights. No one dared step out until the little green man gave the right of way.

The food can be another minefield; lots of pictures to choose from, never quite knowing what you might be ordering, there are generally a few menus with some English translations, only still you’re never quite sure what flavour or taste you might have ordered.

This is more of an issue when preparing for a race. As much as I’m keen to try new things I like to know what I’m going to be eating. When you see the long list under yakatori chicken, using every possible part of the bird, you might just be best sticking to the Japanese language menu and not knowing. Definitely worth it for the presentation though; lots of colour and flavour and texture in every meal, neatly presented in numerous small dishes.

In Japan there are very few recognisable landmarks. It can be a little disorientating when every street corner looks the same, all the street names are in Japanese. Even crossing the street can be confusing; so many pedestrian crossings, trying to work out which way to cross, hoping it’s the right one and you don’t have to wait again at the other side.

Good news is real coffee has found its way to Japan, including speciality coffee shops. In the one we found the barista had a trophy on display, having just won the regional latte art championships.

There’s nothing like a good coffee to reset the uncertainty in a new city. It’s also a good way of working out the Japanese Yen; you can pay 500 yen for a coffee, (€4), 3,000 yen for a decent meal, and I often use the cup of coffee currency, rate of exchange.

Visiting the supermarket in Japan will quickly boggle the mind. This is where there are even less English labels, so it’s best to stick with the tomatoes, salad leaves and avocado, and maybe a few mysterious snacks and treats to pack in the bag and surprise someone.

These may be some of the minor shocks awaiting any Irish people planning on visiting Japan for either the Rugby World Cup in September, or the Olympics in July 2020.

By coincidence I was getting ready to leave for the airport when the Tokyo Olympic qualifications were announced by the IAAF.

Athletics qualification is becoming a bit more complex, falling in line with other sports that require points as a result of constant competition. The difference is the standards have become a whole lot more difficult to achieve as the sole qualification method.

If you were to look purely at qualification standards, based on 2018 performances, Ireland would just have two automatic qualifiers: Thomas Barr in the 400m hurdles and Ciara Mageean in the 1,500m; the 2020 qualification period starts on May 1st and competing regularly will be as important as running fast times to maintain a high world ranking and just maybe get in through that door.

The marathon has so much depth in Japan that the standards to qualify for the trial race are harder than Olympic qualifying standards set by any other country in the world. Japanese women are required to run under 2:24 for the marathon, or an average of 2:28 over two marathons within the past year up until the end of April.

In Nagoya, former Dublin marathon winner Helalia Johannes from Namibia was first across the line in 2:22:25. The first three Japanese athletes were all within qualifying time for the trials a total of nine Japanese women were under the new Olympic qualifying time of 2:29:30.

Outside of the athletes chasing Olympic trial qualification, there was no obvious evidence of the upcoming Olympics or indeed the Rugby World Cup later this year. Nagoya is not a Rugby World Cup host city, although at Tokyo Airport I spoke to a person while waiting and asked if maybe there were more obvious signs on the streets of Tokyo. All he could recall was a giant rugby ball outside the main train station.

Japanese people are certainly very welcoming and courteous. I don’t get the impression they shout too loudly about something that is still a fair way down the track. In Japan things also seem to creep up on you without too much fanfare, and maybe the visiting supporters from all around the world will change that during the Rugby World Cup and Olympics.