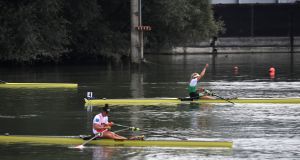 Ireland’s Sanita Puspure celebrates winning the A semi-final and qualifying for the Olympic Games in Tokyo. Photo: Detlev Seyb/Inpho

Three boats qualified for Tokyo 2020 and one medal won. The Ireland team are thriving at the World Rowing Championships – and there are still two days of finals to go.

Katie O’Brien took bronze in the PR2 pararowing on her 23rd birthday.

“To medal at the World Championships is something I’ve always aimed for,” the Galway woman said. “To achieve that today is kind of a good birthday present!”

She has her eyes on the Paralympic Games, should she be able to find a male partner with a similar lower limb disability.

Sanita Puspure and the men’s double joined the lightweight double by qualifying their boats for Tokyo. And, like Fintan McCarthy and Paul O’Donovan on Thursday, they did it by winning their semi-finals.

Both crews did the damage in the middle 1,000 metres. Puspure edged away from the pack at 500 metres. She led her main rival, Emma Twigg of New Zealand, by just under a length at 1,000 metres, then pulled that out to over a boat length at 1,500 metres.

Puspure won in a faster time than Kara Kohler of the US had clocked in the first semi.

The double of Philip Doyle and Ronan Byrne are a confident young crew – Byrne is just 21 – and gave an assured performance. They matched New Zealand early on, used the middle stages to take the lead and then held off the final charges of Britain and Romania to win by just under a second. It was Romania rather than the fancied British who took second and they roared with joy.

Doyle and Byrne sat mutely on the green water on this course beside the Danube and took their time to recover. Like Puspure, their minds will now be on Sunday and their final. And maybe a little thought will be given to Tokyo.

In the B Finals of the lightweight single sculls, Gary O’Donovan took fourth (10th place overall) and Lydia Heaphy fifth (11th), a creditable achievement, given she was competing at this level for the first time. The Ireland lightweight quadruple finished second of two to the United States in their B Final.

The elder O’Donovan brother took his chance to address why he had pulled up and paddled home in the semi-final, admitting that his first season in the lightweight single had been a steep learning curve and the standard at the Championships had been extremely high.

“In the initial stages of the race I tried to do everything I could to stay with them. Maybe I got a bit panicky. But I think that even if I had put together my best race I still wouldn’t have been able to stay with them.”

He had also pulled up in the heat. Why?

He laughs. “I’m still trying to put my finger on that I think. I just think my mind and body weren’t in sync that day.”

The aim for the year ahead is to have everything pulling the same way, so that the lightweight double, whatever the personnel, wins in Tokyo.

The issue of the line-up right now is over.

“We did the seat race and Fintan beat me when I was at my best. They [Paul and Fintan] just barely pipped it across the line yesterday. So I think the right decision was made there and fair play to the lads.

“And I feel they can win it tomorrow!”

Also on Saturday, the women’s pair and four will target places in, respectively, the top five and top two in their B Finals. This would bring the Tokyo spots to five.

Bring on the weekend.