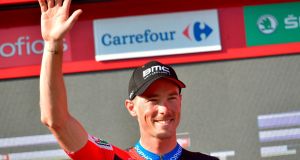 Rohan Dennis of BMC Racing Team celebrates after winning the 16th stage of the La Vuelta after a 32 km individual time-trial from Santillana del Mar to Torrelavega. Photograph: Getty Images

Nicolas Roche’s BMC Racing teammate Rohan Dennis was the winner of Tuesday’s stage 16 time trial in Torrelavega, covering the 32 kilometres in a time of 37 minutes 57 seconds. The Australian was a full 50 seconds quicker than the next-best rider, teammate Joey Rosskopf.

Roche was 45th in the race against the clock, three minutes and four seconds back.

“So far, I think the Vuelta has been the best preparation for the worlds in Innsbruck,” said Dennis, who is targeting time trial success there too. “It has been tough, especially the first nine days with the heat which really knocked me around. Luckily, it started to cool down and I started to feel better and better.”

Simon Yates (Mitchelton Scott) finished a solid 13th, two places and seven seconds ahead of Alejandro Valverde (Movistar Team). That inches his overall lead upwards, with the Briton now 33 seconds ahead of the Spaniard. Steven Kruijswijk narrowed his gap to the red jersey by netting fourth in the time trial; he is 52 seconds off Yates.

With five days to go, the narrow margin means the race is still very much on. Roche is 36th overall, 51 minutes 45 seconds back.

1 Sideline Cut: Vignette shows why Bird is the true shark in The Last Dance
2 Farrell and O’Connell provide insight into changes in Ireland’s analysis
3 GAA preparing for earlier return to activity but pitches to remain closed
4 Joe Burrow’s speed-of-light ascent is every bit of the American dream
5 Liverpool and Everton to oppose plans to play games at neutral venues
Real news has value SUBSCRIBE