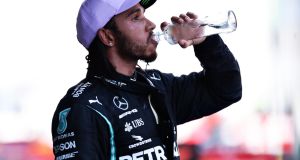 Lewis Hamilton won the Spanish Grand Prix with a controlled run from pole to flag in Barcelona, Catalonia.

Untroubled out front and with no repetition of the tyre problems that blighted Mercedes last week, Hamilton took another dominant victory. He was unchallenged by Max Verstappen in the Red Bull who was second and his Mercedes teammate Valtteri Bottas who was third. Lance Stroll was in fourth for Racing Point with his teammate Sergio Pérez in fifth.

Despite the heat, Hamilton and Mercedes had none of the issues they had suffered at Silverstone and the world champion delivered a sedate win, proving once more that under the right conditions the Mercedes still maintain a definitive advantage over their rivals this season. With overtaking difficult at the Circuit de Catalunya and no unexpected differential to affect the leaders what has been the normal order was resumed.

Rain threatened but failed to arrive and Hamilton having built a lead, controlled it throughout the race with aplomb, if indeed it was somewhat uninspiring fare. By the flag he was 24 seconds clear of Verstappen.

Hamilton’s 88th career win was his fifth in Barcelona and his fourth in a row at the circuit. He moved to within three of Michael Schumacher’s record of 91 wins as he pursues the German’s record of seven championships.

It was his fourth from six races in 2020 and he is leaving the competition behind. Hamilton now leads the championship with 132 points, in front of Verstappen on 95 and Bottas on 89.

With both Mercedes drivers having suffered severe tyre wear on the softer compound rubber and in the heat and heavy loads of Silverstone at the last round, they were soundly beaten by Verstappen’s Red Bull.

The Mercedes team principal Toto Wolff had warned before the race he expected Verstappen to be quickest in race pace at Barcelona, but while the temperatures were high, the harder compound of tyre in use suited the Mercedes and they delivered another dominant race to make it five wins from six this season.

Hamilton made a very good start from pole holding his lead on the 612-metre drag into turn one but Bottas went backwards from the front row dropping to fourth, while Verstappen moved up to second.

The defending champion had opened a gap with a 1.4-second lead by lap four but Verstappen was matching the world champion’s times, maintaining station out of his dirty air. Hamilton was managing his pace carefully nursing his tyres without pushing and the Dutchman duly matched his slow pace. Bottas then passed Stroll to take third on lap five.

By the 13th lap, Hamilton stepped up his pace as the first pit stops approached, opening a 2.8-second gap on Verstappen, which he promptly extended even further. With his tyres apparently holding up, Hamilton pushed and was four seconds up by lap 16.

Verstappen could not live with the pace as his tyres went off, dropping back. Red Bull insisted he stay out until lap 22 when they pitted him for the medium tyre. Mercedes kept Hamilton out for one further lap before he too took the medium tyre, emerging with over five seconds once more over Verstappen.

The drama and tension of the previous two rounds was entirely absent as the frontrunners were all successfully managing the conditions and their tyres. With pace management at a premium this was an amble rather than a charge.

Verstappen pitted for the final time on lap 42 but Hamilton was clearly comfortable on his rubber, staying out until 51 and resumed in front of Verstappen with a full nine-second lead. It was more than enough to see him to the finish, another consummate win and another step toward the title complete. Bottas made a late stop to take the extra point for fastest lap.

Ferrari had another difficult weekend. Charles Leclerc suffered an electrical problem that led to an engine failure on lap 37 and was forced to retire. Sebastian Vettel however did manage seventh using a one-stop strategy.

McLaren’s Carlos Sainz was in sixth with his teammate Lando Norris in 10th. Alexander Albon was in eighth for Red Bull with AlphaTauri’s Pierre Gasly in ninth. - Guardian