US Open tennis: Kvitova beats Jankovic in first round 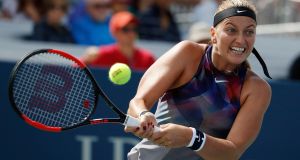 Petra Kvitova during her match against Jelena Jankovic on the first day of the US Open Tennis Championships. Photograph: Jason/Szenes

Petra Kvitova has yet to return to her best level, but at least being on a tennis court is starting to feel normal to the Czech player, eight months after she suffered career-threatening injuries when she was stabbed by an intruder in her home.

The twice-Wimbledon champion, who missed five months of action after being stabbed in her playing hand last December, scraped into the second round of the US Open by beating former world number one Jelena Jankovic of Serbia 7-5 7-5 on Monday.

“Things like seeing other players, seeing coaches, being on the tennis court, practising with other girls, that feels more normal than before, for sure,” the 13th seed told reporters.

“For me, like, warmups before the matches or matches are already normal, I have to say. But on the other hand, it’s still very special and I’m still very grateful for it.

“Few things are more normal than before, but few are still a little bit different.”

The Czech, in search of top form after a mediocre build-up to the year’s final grand slam, struggled to adapt to Jankovic’s counter-punching style but eventually wore down the 2008 runner-up to set up a meeting with France’s Alize Cornet.

“She did just a great job, mentally, because from what I heard it was not even sure that she could play tennis again,” said Cornet, a 6-4 6-4 winner over Britain’s Heather Watson.

“I’m really happy for her because she is a very nice person and there are not so many of them on the tour.”

Kvitova, who had nearly four hours of surgery on her left hand and returned to competition at this year’s French Open, won a first set that featured three breaks of serve as both players struggled to find their range in Louis Armstrong Stadium. She rallied back from 2-0 down in the second set but dropped serve again in the seventh game. However, Kvitova regained her composure to win four consecutive games and secured the win on her first match point with a sizzling forehand winner down the line.

Wimbledon champion Garbine Muguruza notched up her first ever victory on Arthur Ashe Stadium with a 6-0 6-3 win over American Varvara Lepchenko.

Despite winning two grand slam titles, Muguruza has never felt at home at Flushing Meadows as she has never advanced past the third round here.

“I have been here so many times and I’ve never done very well,” said the Spaniard.

“I give everything I have on the court.

“She started a little nervous and I started well. Then it got more equal and became a good fight.”

Lepchenko struggled with her accuracy on the partly-cloudy morning, committing 22 unforced errors to Muguruza’s 11.

The 23-year-old Muguruza was aggressive throughout, frequently coming to the net and using her powerful ground strokes to push Lepchenko into awkward court positions.

Muguruza will next face either American Claire Liu or Duan Ying-ying of China.