England dare to dream after batsmen finally offer some resilience 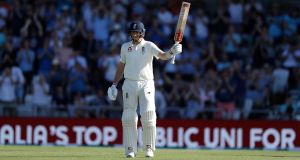 Joe Root finished the third day at Headingley on 75 not out. Photograph: Ryan Pierse/Getty

England captain Joe Root carried his side’s hopes of keeping the Ashes alive as he dug deep in pursuit of a record fourth-innings chase on day three at Headingley.

Australia set the winning line at a distant 359 in the third Test — 27 more than any other England side have ever managed — and hoped to reopen the fault lines that saw the hosts skittled for a paltry 67 on Saturday.

England might have been suffering deja vu at 15 for two but Root showed steel, determination and leadership as he reached 75 not out in a stumps total of 156 for three.

Root arrived at the crease having failed to score in each of his last two knocks but channelled the old-fashioned virtues that his side have too frequently neglected as he dropped anchor for five hours deliveries and 189 deliveries.

His primary foil was Joe Denly, who survived an uncomfortable start to his innings to make 50 in a vital third-wicket stand worth 125.

Root will begin again on day four alongside his deputy, Ben Stokes, with England needing another 203.

The stakes are simple: achieve a remarkable result and the series will be squared at 1-1 with two to play, fall short and Australia keep the urn.

England’s highest chase of 332 for seven dates back to 1928 but Leeds has more recent history for fourth-innings drama — with the West Indies hunting down 322 in 2017 and Mark Butcher leading his country to 315 in the 2001 Ashes.

It took just under 90 minutes to set up the final equation, Australia adding 75 for their last four wickets to finish 246 all out.

Jofra Archer took two wickets to finish with a match haul of eight for 85, Ben Stokes was rewarded for a tireless stint at the Football Stand End and top-scorer Marnus Labuschagne was finally run out for 80 after Jonny Bairstow’s drop reprieved him for the fourth time.

That left four overs for Rory Burns and Jason Roy to negotiate before lunch, which they managed unscathed barring a bloodied thumb for Burns.

Any early optimism burst when both departed in the first 15 balls of the afternoon. Josh Hazlewood left Burns nowhere to go with a bumper that seamed sharply from leg to off and clipped the shoulder of the bat and Roy was undone by an exquisite ball from Pat Cummins.

Pitched full and fast, Roy attempted to offer the face of the bat, only for the ball to straighten off the pitch and re-route into off stump. That took his tally at opener to 61 from seven attempts and a demotion — either down the order or out of the team — now seems inevitable.

Australia sniffed another rout and had Denly in their sights. The 33-year-old’s first ball pinged for four after an ill-executed leave and before long he was rapped flush on the helmet by a Cummins bouncer.

Things lurched towards the bizarre he survived an lbw appeal off the forearm and an evasive fend off the glove just cleared gully, but the beginnings of an important stand were slowly forming.

Root was in control, leaving and defending stoutly while still picking up 41 in his side’s tea score of 90 for two, with Denly emerging from his shell with a confident pulled four.

Scoring continued at a gentle rate — 2.16 per over by the close — but with a handful of mini-landmarks for the fans to cheer.

There was a loud celebration of Root’s half-century, brought up in 120 balls with an elegant stroke through cover and another for the hundred stand, ticking by with a single after three consecutive boundaries.

Denly was next to bring them to their feet, going to 49 with a pair of fours off Cummins then dashing through to join his partner on 50.

It had gone 6pm when Australia rallied from a growing malaise, Nathan Lyon sowing doubt with a testing over containing two big lbw shouts and a run out appeal against Denly.

Hazlewood was into a bustling spell at the other end when he dug in a middle-stump bouncer and finally ended Denly’s resistance, gloving through to Tim Paine after 53 overs of refusal.

England added just 15 more in the last 12 overs, Stokes chewing through 50 balls for just two singles, but every block was warmly welcomed. The second new ball is due in eight overs and the early burst with a fresh Dukes now looks a critical passage for the fate of the match.

Having come close to the precipice during their first-innings nightmare, the possibility of a redemption story remains on the table.