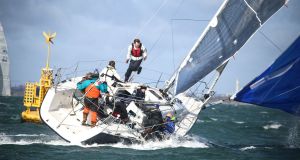 J109 Dear Prudence is well heeled-over after a gybe in this year’s DBSC Spring Chicken race that concludes this Sunday. Photograph: David O’Brien.

If success is measured by fleet size then July’s Dún Laoghaire Regatta looks on course for a buoyant seventh edition with half of its massive fleet already signed up for the country’s biggest sailing regatta.

There are 2,500 sailors expected to race across 22 classes so outgoing Irish Sailing Association (ISA) president David Lovegrove rightly noted at Wednesday’s launch that the Volvo sponsored regatta will be one of Ireland’s biggest sporting events when the first gun fires on July 6th.

Only once since its inaugural outing in 2005 have numbers dipped below 400 for the biennial sailfest and that was in the teeth of recession in 2013. But even then the fleet only dropped to 393, just 93 lower than 2007’s record of 486.

With 223 entries now in from across the Irish Sea, entries are stronger than expected as all four Dún Laoghaire yacht clubs bang the drum for the harbour’s bicentenary year.

A special “Kingstown 200” Cup will be presented to the winner of the regatta’s classic boat division that includes a “parade of sail”.

Speaking at the launch, 2015 and 2017 chairman Tim Goodbody, said the regatta owed its prominence in European sailing events to a number of factors: “One of the reasons it attracts so many entrants is that it is one of the least expensive sailing events in Europe, thanks to generous sponsorship and support.”

London 2012 Olympic Race officer Jack Roy from Dún Laoghaire will succeed Lovegrove when he steps down after a three-year term at Saturday’s ISA agm at Howth Yacht Club. The meeting will be followed by an ISA dinghy and one design keelboat forum to “target growth in participation”.

There will be eight places on the ISA Topper Squad and five on the Laser 4.7 Squad as part of April’s first ever staging of the ISA Youth pathway championships in Northern Ireland.

Ballyholme bay on Belfast Lough from April 19th to 23rd is the venue for Ireland’s largest youth regatta and the ISA’s primary “talent spotting” event of the year for its academy and junior classes.

The first four teams at Saturday’s Leinster Schools Team Racing Championship will qualify to compete in the Irish Schools Championships in Schull next month.

With five teams entered for the Firefly dinghy event at the Royal St George Yacht Club, only one of the three boat teams will be denied April’s West Cork trip.

A last race discard threatens to upset the overall scores in the Dublin Bay Sailing Club Spring Chicken series on Dublin Bay. While a 1720 Sportsboat leads the weather-hit series, a number of J109s are in the frame if a final race of the Rathfarnham Ford event sails on Sunday morning.