Over €10,000 raised for two charities as 73 competitors compete in Killarney 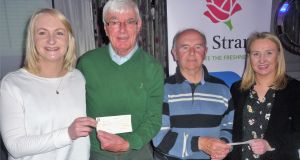 THE 31st ‘Charity’ Trout Competition on Lough Lein in Killarney last weekend was once again a resounding success with €10,000 collected and equally divided between two local charities.

Accepting a cheque on behalf of the Irish Pilgrimage Trust, Tim O’Brien said the money will go towards sending children to Lourdes while Acquired Brain Injury manager, Lisa Spogler said it will help finance the new resource centre presently under construction in Castleisland.

This huge sum of money was raised by the anglers and the generous sponsorship of local supporters of the ‘Charity’ especially Lee Strand, distributors of liquid milk in the Kerry and West Limerick area.

The competition is held under the auspices of Lough Lein Anglers’ Association and this year 73 competitors from across Ireland took to the waters of Killarney’s treasured lake. Weather conditions were ideal with plenty of cloud cover and light breeze which resulted in 121 trout presented for weigh-in at Ross Castle.

I teamed with local angler and guide Robert [Robbie] O’Brien and together we fished the Bog area for most of the day with reasonable success. As an angling guide, Robbie is rated as one of the best boatmen on Killarney lakes.

Pat Hoare from Blarney took the honours on the day with eight good trout to win the Hegarty Perpetual Cup.

“I fished the Fossa Shore all day with a Sooty Olive. My previous best was the Munster championship in 2011,” he said.

Later, over a most enjoyable dinner, the presentation of prizes took place in the Dromhall Hotel where Jerry Dwyer, Operations Manager of Lee Strand (main sponsors), presented the prizes along with club chairman John Lyne.

At a recent Topical Issue Debate chaired by Minister Denis Naughten, concern was raised regarding depletion of fish stocks and pollution on the River Barrow.

Based on salmon rod catch returns and exploitation rates, the Barrow was meeting just 17 per cent of its conservation limit. Therefore, for the 2018 season, the river has been deemed open only for catch and release.

This low figure was in accordance with salmon fry densities recorded in electro fishing surveys.

In 2015, Inland Fisheries Ireland undertook a fish stock survey of 35 sites on the main channel and canal cuts, and 118 sites in 21 sub-catchments. Information collected provided details on the different life stages of brown trout, Atlantic salmon, coarse fish and pike. A total of 14 species and one hybrid were recorded.

In general, a good fish status was reported in the upper reaches above Mountmellick while downstream many ponded sites were assigned a status of moderate or worse.

The minister said: “There are angling opportunities on the River Barrow, however, the significant challenge is salmon.”

Proposal for catch and release of all salmon in Welsh rivers

New fishing byelaws have been proposed which will make it mandatory for fishermen to release all salmon caught in Welsh rivers this year.

The procedures for introducing new byelaws are protracted and Natural Resources Wales wish to avoid uncertainty for fishermen by delaying implementation of approved new measures until the 2019 fishing season.

The proposals, which include restrictions on fishing methods to help survival of released fish and reduced net fishing seasons, are currently being considered by the Welsh government.

Welsh salmon stocks remain in a perilous condition. Although the mandatory catch and release proposals have proved unpopular, NRW firmly believes that along with measures such as tackling agricultural pollution, improving water quality and managing potential threats from predators, are vital for the survival of these iconic fish.

Dave Mee, senior fisheries advisor for NRW, said: “Our salmon stocks are in serious trouble and have fallen to historically low levels and the same is true of 50 per cent of our sea trout stocks.

“Neither species can sustain uncontrolled killing of fish. So, we are again asking anglers to release all of their salmon.”

The European Cup Trout Fly Angling Championship will be held on Lough Mask, Co Mayo on Saturday, 19th May, 2018. Anglers are required to organise their own fishing partner and boat, and to register at Máire Lukes or Lough Inn before 10am. Fishing is from 11am with finish/weigh-in at 7pm in Máire Lukes, Tourmakeady.

The pattern comes in a variety of sizes and colours to imitate everything from small olives to mayfly and, due to its buoyancy, sits invitingly on the surface.

Contact Jimmy at irishflycraft@gmail.com or 086-845 1257 to avail of the pattern. angling@irishtimes.com