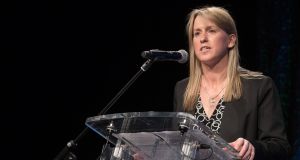 There has been a broad welcome for the Government’s €36 million funding increase to Sport Ireland in Tuesday’s budget.

The Federation of Irish Sport, which represents over 100 national governing bodies and national sports partnerships including the GAA, FAI and IRFU, described the budget steps as “unprecedented”.

In June, a sporting landscape devastated by the coronavirus pandemic was boosted by €70 million in emergency funding, with the three main sporting organisations, the GAA, FAI and IRFU, getting up to €40 million.

The rest was distributed between resilience funds for national governing bodies and sports clubs, as well as a sports restart and renewal fund.

Tuesday’s budget continues that momentum in supporting governing bodies through an uncertain period with sport taking place behind closed doors.

Jack Chambers, the Minister of State for Sport, said the development of key projects in the National Sports Campus in Blanchardstown is a core objective and €9.7 million will go to progressing it.

He also said that applications will be open in the coming weeks for funding to support clubs under a new sports capital programme.

The Federation of Irish Sport’s chief executive, Mary O’Connor, said: “Our initial reaction is a huge welcome. It’s an unprecedented allocation for sports in terms of budgeting, taking into account the challenge of Covid-19.

“But we absolutely welcome it. We need to hear the detail of the €36 million and where the allocation will be.

“But there is scope there to ensure that current funding for national governing bodies and local sports partnerships will see an increase in 2021. We have to see the detail but we’re absolutely delighted.

“There is an understanding that when you invest in sport there is a return economically and socially on you investment and the Government knows that.”

O’Connor said its priorities for next year are to have Olympians and Paralympians properly resourced ahead of Tokyo 2021 but also underlined the importance of governing bodies providing mass participation opportunities.

“That is the one thing we needed to ensure with Covid-19 and people’s wellbeing, both mental and physical, that they are resourced and can run their programmes and initiatives and their outreach and they can remain viable,” she said.

O’Connor also welcomed the Government’s continued commitment to their plan for doubling funding for sport by 2027.

“They’ve delivered and so must be commended for that in light of the significant financial pressures that are out there,” she said.

The extra €36 million to Sport Ireland brings the 2021 budget for the body tasked with the development of sport in Ireland to €104.5 million.

Its chairman, Kieran Mulvey, said: “Like all areas of society, the impact of Covid-19 and associated restrictions has had a substantial impact on the sporting landscape. National governing bodies, local sports partnerships, clubs and groups all over Ireland have seen their activities significantly curtailed in 2020, which has in turn placed a financial burden on most, if not all.

“The acknowledgement of this by Government and the allocation of an additional €36 million to Sport Ireland is to be welcomed. The funding announced today will provide a significant boost to the sports sector.”

Other reaction to the budget included a welcome from the Olympic Federation of Ireland.

“We understand that this additional contribution to Sport Ireland will provide much needed support for the sector and will allow continued planning for high performance athletes ahead of next year’s Tokyo Olympic Games and the Paris 2024 cycle.

“This is welcome news for our athlete community who deserve our support and are working tirelessly to represent Ireland on the global stage.”

1 Shock at golf clubs as sport faces shutdown in Level 5
2 The biggest game in their history? Ireland women v Ukraine - all you need to know
3 Dan Martin toasting another stage win at the Vuelta
4 Dan Leavy could make Leinster return against Zebre
5 Level 5 golf shutdown: Ireland one of few countries to close courses
Real news has value SUBSCRIBE
Here is your handy guide to sport on television this week