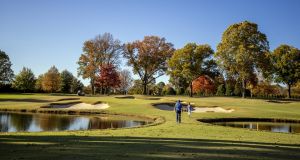 Southern Hills Country Club in Tulsa, Oklahoma, was awarded the 2022 US PGA Championship on Monday after tour officials previously decided the Trump National Golf Club in Bedminster, New Jersey, would no longer have the event due to its affiliation with the former president.

Next year’s US PGA Championship is scheduled to take place from May 19th to 22nd, 2022.

Southern Hills has hosted seven men’s major tournaments – three US Opens and four PGA Championships – in addition to the first US Women’s Mid-Amateur in 1987.

Tiger Woods claimed the last US PGA Championship held at Southern Hills in 2007, with Nick Prince winning the 1994 event, Raymond Floyd in 1982 and Dave Stockton in 1970.

Retief Goosen won the 2001 US Open at Southern Hills, with Hubert Green and Tommy Bolt winning in 1977 and 1958, respectively.

“It has become clear that conducting the PGA Championship at Trump Bedminster would be detrimental to the PGA of America brand and would put at risk the PGA’s ability to deliver our many programs and sustain the longevity of our mission,” PGA president Jim Richerson said two weeks ago. “Our board has thus made the decision to exercise to terminate the contract to hold the 2022 PGA Championship at Trump Bedminster. It was a decision made to ensure that the PGA of America and PGA professionals can continue to lead and grow our game for decades to come.”

Southern Hills also hosted the Tour Championship in 1995 and 1996, won by Billy Mayfair and Tom Lehman, respectively. The venue also hosted the 1946 US Women’s Amateur, won by Babe Zaharias.

Southern Hills most recently held the 2009 US Amateur, won by Byeong-Hun An.

It is unclear if Southern Hills still will host the 2030 US PGA Championship, as previously scheduled. The host course for that event is listed as “TBD” on the PGA of America website.

Prominent owners terminate contract as Gordon Elliott’s yard sponsor 09:45
Gianluigi Buffon at 43: why messing up is key and what makes him happy 09:39
Manchester City go 15 points clear; Gordon D’Arcy on what we can learn from Italy win 07:36
Gordon D’Arcy: Ireland merely picked through the carcass of Italian rugby 06:00
Munster looking to drive home their advantage on Thomond Park run-in 06:00
Here is your handy guide to sport on television this week