Peers united in their respect for Tiger’s phenomenal achievement 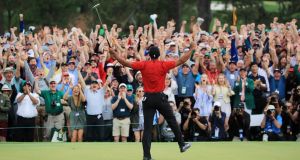 Tony Finau congratulates Tiger Woods on his win after the final round of the Masters at Augusta National Golf Club. Photograph: Andrew Redington/Getty Images

It is highly rare for those defeated to take such joy from the identity of the winner at the Masters.

That Justin Thomas, Rickie Fowler, Xander Schauffele, Bubba Watson, Ian Poulter, Brooks Koepka, Bernhard Langer and Adam Scott stood to shake the hand of a victorious Tiger Woods as he headed to sign his Sunday scorecard at Augusta National proved a sign of things to come.

The world’s leading players lined up to pay tribute to Woods as he donned a Green Jacket for a fifth time.

“Couldn’t be happier for him, what a great day for golf,” said Rory McIlroy.

Woods owes McIlroy and co a debt of gratitude as well. As the now 15-times Major champion began his journey back towards tournament golf, following a fourth back surgery, Florida’s young professional golf contingent were a constant source of encouragement. Woods regularly played practice matches with them as he sought to ascertain whether his body would allow him to be competitive again.

“I think we all knew it was going to come. I said it last year at the Open. I thought he was ready, raring to go to win a Major again and it only took him two more tries. It’s impressive, it’s fun to watch and, just as a fan of golf and Tiger, it’s very special. The atmosphere around Tiger is mind-blowing.”

The by-product of Woods’s prominence is, of course, more attention towards professional golf in general. It is no surprise, therefore, to see his fellow players offer congratulations.

Yet it felt on Sunday as if there was a general sense of appreciation towards what the 43-year-old had achieved during one of sport’s greatest ever comebacks.

“It’s an amazing story,” said Tommy Fleetwood. “Not just in golf, in sport; in life.”

The problem for these golfers will, of course, arrive should Woods become anything close to his dominant past. Then, one assumed, the adulation will not quite be so forthcoming.

Schauffele finished alongside Koepka and Dustin Johnson as runners-up.

Tony Finau’s scenario was different from everyone else – Francesco Molinari aside – because he spent Sunday in Woods’s company.

“It was great,” Finau said. “To witness that, a handful of years ago I don’t know a lot of people believed that Tiger would win another Major. From what I saw obviously he’s not going anywhere anytime soon.

“You can’t say enough about Tiger and what he’s done for the game. It’s great for him to be involved in the game and now he’s got his 15th Major. He’s going to be a force to be reckoned with these next few years, I’m sure.” – Guardian