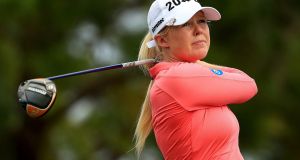 Stephanie Meadow hits her tee shot on the fourth hole during the final round of the Pelican Women’s Championship at Pelican Golf Club on Sunday, in Belleair, Florida. Photograph: Mike Ehrmann/Getty Images

Stephanie Meadow – the 28-year-old Northern Irishwoman – reaffirmed her huge potential in the LPGA Tour’s Pelican Women’s Championship at Belleair in Florida, where a well-crafted final round 69 for a nine-under-par total of 271 gave her solo third place and a payday of €85,415 ($101,250).

As world number two Sei Young Kim of South Korea continued her dominant form of late, adding the title to her recent Major breakthrough in the KPMG LPGA Championship, it proved to be a standout performance in this disrupted season for Meadow as she recovered from a bogey-bogey start to bounce back and nail a top-three finish.

Meadow, set to qualify for next year’s rescheduled Olympics in Tokyo where she will also be joined by Leona Maguire, suffered bogeys on the first and second holes but responded with birdies at the sixth and seventh to turn in level par 35 on her round and then birdied the 10th before dropping a further stroke on the 12th.

Birdies at the 15th and 17th moved Meadow into a share of second place with American Ally McDonald playing the 18th. However, Meadow’s approach shot went over the back of the green while McDonald’s approach finished eight feet behind the flag. Meadow’s pitch ran 25 feet by the hole and she raced her par putt some five feet by but coolly holed out for a bogey to finish alone in third, a shot clear of Lydia Ko and Austin Ernst.

Meadow moved from 59th to 35th on the LPGA Tour’s Race to CME Globe order of merit and is assured of her place in the season-ending Tour Championship, which is limited to the leading 60 players on that list and which offers a $1.5 million top prize.

Maguire finished with a 74 for a total of 287, seven-over, in tied-54th. Both Meadow and Maguire are in the field for the Volunteer of America championship in a fortnight’s time.

It was a 12th career title on the LPGA Tour for the in-form Kim, as the South Korean aims to bring her hot streak onwards to next month’s US Women’s Open in Texas.

On the PGA Tour, American Rob Streb (33) defeated compatriot Kevin Kisner with a birdie at the second playoff hole to capture RSM Classic at Sea Island in Georgia. Streb closed with a 68 to Kisner’s 63 for the two players to be locked on 19-under-par 263, with Streb sealing his third PGA Tour title at the second extra hole of sudden death.

Shane Lowry completed his stint stateside with a closing 67 for six-under-par 276 for tied-50th, while Graeme McDowell had a 72 for 280 to finish in tied-59th.

Keeping the world off-balance is what Kyrie Irving does best 12:02
Eddie Jones forced to self-isolate after his assistant tests positive 11:44
Rory McIlroy confident Tiger Woods 'will be just fine' 11:38
Two more Australian Open players test positive for Covid-19 10:10
Frank Lampard: ‘the good thing for me is I’m good at handling pressure’ 09:05
Here is your handy guide to sport on television this week