Young Rebels can become the aristocracy 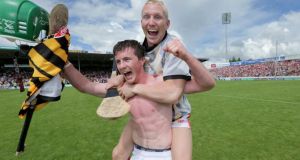 They strolled out of the tunnel in ones and twos to watch Clare beat Galway. Compact men, so notably conditioned, their faces unfamiliar to the general public. Not a Donal Óg or Seán Óg in sight with Tom Kenny the only All-Ireland medal owner among them.

The problem for Anthony Daly’s Dublin is the glint in the eye of these young hurlers.

They look down the road now and see Limerick installed as 9/4 favourites to capture Liam McCarthy. They are sitting pretty alongside Dublin on 5/2 with Clare 10/3. Tradition suddenly matters again.

Limerick stretched away from them in the Munster final but only after Patrick Horgan’s hurley tapped the back of Paudie O’Brien’s ceann.

Those who watched Sunday’s All-Ireland quarter-final with a forensic eye might question his man of the match accolade after the heroics of Shane O’Neill down the other end of the field. Or Conor O’Sullivan’s taming of big Walter Walsh. Or Daniel Kearney’s controlled ferocity near spilt ball (same for William Egan). Or Séamus Harnedy’s general excellence. Or Tom Kenny’s Larry Holmes impression – repeatedly tagging the greatest.

Rapid spray
But Horgan’s contributions did the most to soundly beat Kilkenny: a rapid spray of three points from minute five to seven; a free from miles out on 10 minutes after Henry Shefflin’s first yellow; a point from play on 29 minutes; another free moments having drawn a foul off JJ Delaney; the rifling of Cork’s eleventh score as Shefflin jogged away.

Most of all his pair of scores on 47/48 minutes silenced a growing din of Kilkenny people amidst the 33,383 fundamentalists hemmed into the cathedral.

After the game we spied the 25-year-old at the edge of the tunnel as Clare hurlers thundered onto the Semple turf. He was talking about matching Kilkenny’s power.

“They are big boys, as you see there at the end, number seven [Kieran Joyce], he is like a wall. Nah, we just said if we give it everything and compete for the ball. We’re big and strong as well. As long as we got the ball down to the ground was a big help for us because we are quick. That would be our strength, you know?”

Everybody knows that now. It’s the size of the fight in the man.

“My role is to get on the breaking ball,” said Kearney, “you have to play to your strengths and I would freely admit I’m not the best in the air. I leave that to the half backs and half forwards and I’m expected to clean up the breaks.”

There was no advance warning that such a dominate performance would come out of Cork.

A side that contained senior starters – Conor Lehane, Christopher Joyce and Jamie Coughlan – were knocked out of the under-21 Munster championship on July 17th, conceding five goals to a rampant Tipperary, so soon after the Munster final defeat to Limerick.

“Training Tuesday and Thursday was very hard but Jimmy just said to us ‘boys you have to knuckle down.’

“We knew ourselves that what we are lacking was that winning instinct; when we are in games that we need to develop that steel to win in the final 10 minutes because we are always in games until that point and then letting teams back into it.”

‘Nothing is won’
Before disappearing over the border to Kilkenny, Brian Cody entered the Cork changing room on Sunday.

“Everyone stood up fairly quickly,” Kearney continued. “He does have a bit of an aura about him alright. He was just saying that nothing is won and we know we have nothing won either, if we lose against Dublin that no one is going to remember that we beat Kilkenny in the quarter-final.”

Disadvantage
They all tipped their hats to Dublin. Anthony Nash, the latest custodian of the striped goalkeeping jersey, noted their victories over last year’s All-Ireland finalists and suggested playing hurling in Croke Park in August would be a disadvantage to Cork.

“We’re going to be underdogs again and rightly so because we’re playing Dublin in their backyard and we’re going up against a team that’s on a phenomenal run.”

No way of playing the next two weekends down. Cork and Dublin. Rebels raiding the capital.

Barry-Murphy said it best: “Dublin are a great team, great manager. Beat Kilkenny in a replay. It is going to be a great occasion. I think we have a great chance. I’m sure they’ll think the same.”

Brendan Rodgers says he was ‘really knocked’ by coronavirus 19:02
GAA preparing for earlier return to activity but pitches to remain closed 18:07
HRI announces full jumps programme up to start of August 17:03
La Liga season to restart on June 11th with Sevilla-Real Betis derby 16:26
Liverpool and Everton to oppose plans to play games at neutral venues 17:18
Crossword Get access to over 6,000 interactive crosswords