Same as it ever was for Dublin against Kildare 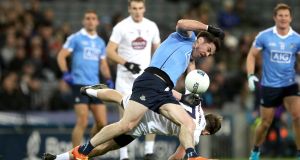 A new year, the same old story. Dublin still haven’t lost a league opener under Jim Gavin and in this, his sixth season in charge, they never looked in realistic danger. They faced down a decent first-half showing from Kildare to put in a rampant closing 35 minutes, outscoring Cian O’Neill’s side by 2-10 to 1-4 after the break.

That said, they did take their time about it here. Dublin played out the first half with an early-season sloppiness that is generally forgivable - expected, even - in other counties. Dean Rock was missing frees, Bernard Brogan was flitting around the margins, James McCarthy had no real purchase around the middle. They gave away an early goal to Luke Flynn that was so slapdash it would have made a coach stop a training session and start hurting some people’s feelings.

A Paul Cribbin point attempt was dropping wide at the far post and everyone except Flynn moved to get ready for the kick-out. Even Stephen Cluxton switched off, meaning that when Flynn gathered on the endline and turned inside, the Dublin goalkeeper wasn’t set for the shot and barely stuck a foot out as it beat him at his near post. It was about as neat a summing up of Dublin’s first half as you could ask for.

On the blue-moon occasions that Dublin put in a spell like that, the opposition lives or dies on the chances they convert. Kildare’s problem was that they got to half-time only two points ahead. Where Luke Flynn took his goal, older brother Daniel blazed two equally goods chances over the bar. Add in the six wides Kildare had on the board before half-time, the 1-6 to 0-7 scoreline would have felt like thin enough gruel in the Kildare dressing room.

So it proved. Dublin had the two-point deficit taken care of before the 37th minute was out. They started to squeeze up on Mark Donnellan’s kick-out and for a few minutes no Kildare player could get a hand on the ball. The Dubs got in for a couple of ominous goal chances - Niall Scully screwed one horribly wide, Rock did likewise just seconds later. Kildare were gasping for air and we were into when-not-if territory.

When the inevitable came, it was quick and ruthless, with two rat-a-tat goals inside a minute. Brogan was involved in both of them, laying off a deft flick to Rock for the first one and batting down a nice break to the raiding Brian Fenton for the second. Fenton had already knocked over the opening two points of the half, meaning that within 10 minutes of the restart, Dublin had gone from two down to seven up.

From that point on, it was a matter of keeping count. Scully, Brian Howard and Colm Basquel all made hay, Jim Gavin emptied his bench and poured Kevin McManamon, Philly McMahon and Paul Mannion into the fray. Any notion Kildare had of keeping themselves interested was quashed.

Daniel Flynn did manage an exquisite goal, tucked high past Cluxton’s right hand, just as the clock ticked 70. But it was way too late for that kind of thing.