Impressive Dublin show Kerry the scale of the task ahead 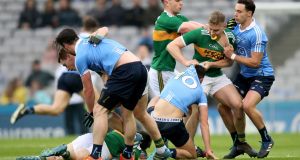 Long before the end Kerry had settled for a learning experience: not the modern, holistic, child-centred type of education but old-school teaching, culminating in a severe beating when they didn’t ‘get it’.

There had been good anticipation before Sunday’s AFL Division One encounter between last year’s All-Ireland champions and league winners in front of 24,026 at Croke Park.

Kerry manager Eamonn Fitzmaurice had started to give youth its head and the recent ranks of underage talent were being mobilised in a first league campaign.

Results had been necessarily mixed but the good surface in Croke Park and the motivation of taking on football’s dominant force were expected to drive the visitors. Last season, Dublin had failed to beat Kerry in two league encounters, including the final.

For 20 minutes or so, the contest looked very interesting. Kerry were sharp and their young forwards looked menacing. David Clifford, the uber wunderkind caused Cian O’Sullivan such discomfort that Dublin’s renowned defensive co-ordinator had to be switched with Jonny Cooper.

By the 10th minute, Kerry led by 0-4 to 0-1, Clifford one of four different scorers registering from play. Kevin McCarthy’s point was a goal opportunity tipped over by Stephen Cluxton, who shortly afterwards had to react smartly to punch out a dropping ball from Clifford.

During the following 10 minutes, Dublin caught up whereas Kerry began to falter – Paul Geaney rapping the post with a goal attempt, albeit McCarthy followed up with a point.

Then in the 20th minute, a fine defensive read by Cooper triggered a move that culminated in Brian Fenton getting Shane Carthy in on goal. Shane Murphy saved the initial effort only for the deflection to hang up invitingly for Niall Scully to bang in his second fisted goal in successive matches.

At 1-5 to 0-6, it wasn’t like the roof had fallen in on Kerry but there was water dripping into the living room. As further indication of the trend, Geaney’s terrific ball into O’Shea opened up a route to goal but after riding a tackle, the young centre forward opted to dynamite the shot and it flashed wide.

Dublin manager Jim Gavin acknowledged afterwards of the golden opportunity: “if he took it there would have been a different complexion on the game”.

Inexorably, the scores were mounting for Dublin. Ciarán Kilkenny continued the trend of this league in playing close to goal and shooting for scores, to such effect that he ended the match with 1-3. Dublin led at the interval by 1-8 to 0-8.

As a reflection of the tussle at its most intense, two black cards were handed out before half-time – one to Barry O’Sullivan for pulling down Brian Fenton and the other to John Small for an off-the-ball drag down on O’Shea.

The trend had been more ominous though than a simple, one-goal deficit. From looking slightly at sea when Kerry were at their sprightliest, Dublin got things back under control. Although short five of their seven current All Stars, the All-Ireland champions were getting good displays from the likes of Scully and Kilkenny up front whereas in the middle, Brian Fenton shook off the familiar difficulties with Jack Barry to hit his stride.

Most strikingly, Michael Darragh Macauley was at his wrecking-ball finest. Regular appearances this campaign have drawn a good response from the 2013 Footballer of the Year, whose prominence had slackened in recent years. In the second half, his hard running beat defenders almost at will. Twice he created goal chances for others but- both Brian Howard and replacement Ciarán Reddin hit the post.

Kerry’s hopes were already fading by the start of the second half. Geaney and O’Shea, two of the attack that had generated the early sparkle, had to go off with unspecified injuries.

“We lost a bit of impetus and direction up front,” said Fitzmaurice about the loss, “but look we just have to learn from it. We just have to move on and, like I said, it was a pretty chastening experience for all of us.”

His team’s blow-out can be seen in the statistic that they managed 0-3 in the closing three-quarters of an hour, while their opponents shot 1-11.

The goal, which performed the last rites on the contest came from Kilkenny tucking away a rebound after an assist from the lively Colm Basquel six minutes after the resumption.

There was a moment of concern for Dublin when Cian O’Sullivan had to be ferried off on a trolly off with a shoulder injury but Gavin was upbeat about it later.

“He has range of movement, which is very positive so that is the good news.”

For Kerry, David Moran made his first appearance of the season. But that was the extent of the positivity for the Kingdom during a second half which starkly outlined the nature of the challenge ahead.