The general election is over in Dublin. As the RDS empties itself of political supporters, journalists and election paraphernalia Harry McGee reports on the overall picture from #GE16 . Video: Bryan O’Brien 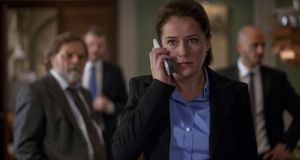 ’We are going to Borgen the bejaysus out of you bunch of Scandi-loving ingrates’ Photograph: Mike Kolloffel MAG TV

I am sorry, but we are going to have to have another election. There seems to have been a terrible mistake. You have once again failed your political class. And what is most annoying about your obtuseness on this occasion is that it has not been for the want of being told.

One has to wonder what is wrong with you people? Which bit of Fianna Fáil and Fine Gael can never do business with each other do you not understand?.

You were clearly not paying attention during the campaign. Did you think Enda Kenny was joking during the final leaders’ debate? Asked by Claire Byrne if he would do business with Micheál Martin, he replied: “certainly not.” Did Martin not make his position equally clear?

You would have hoped this was enough for most people. But you have perfidiously engineered a situation whereby a coalition between Fine Gael and Fianna Fáil seems the only stable option on offer.

Every single one of you so-called voters should be sent to your bedrooms to have a long hard think about what you have done. You have failed to grasp a simple truth: the Irish political landscape must be defined by the events of 100 years ago and not by what you think is best for you now.

You clearly have no comprehension of the uncontrollable forces you will unleash if this iron rule of Irish politics is discarded like it was just some sort of manifesto commitment.

You have also clearly not stopped – even for a second – to consider what coalition means for the countless petty rivalries and the snobbish bickering that creates the local watershed between Fianna Fáil and Fine Gael up and down the country. If these ancient blood feuds are not perpetuated and regionalised by our political system then the very fabric of our society – not to mention rural Ireland – is at risk. This is clearly a price not worth paying for stable government and realignment of politics along something resembling sensible lines.

Do you really want to strip away something that defines us all? Is it not enough that we have had to see our children emigrate, our Garda stations close and our relatives spend hours on hospital trolleys? Now you want to take away something really important: a dysfunctional system dominated by two parties that nobody can differentiate between without resorting to words like “tribal” and “visceral”. All this – with its glorious tradition of regular national bankruptcy – abandoned in the name of so called political progress? What next? Gay people being allowed to marry?

Anyway. You have had your fun. What is done is done. It is the will of the people and it must be undone as soon as possible. And that means back to the polls for you lot post-haste. And this time you had better get it right.

If social democracy is what it takes to preserve the civil war fabric of our political system then so be it. It’s worth it. But be warned. You are going to be sick of it by the time we are finished with you. In fact, we will publish our election manifestoes in Norwegian with ABBA as a backing track if that is what you want. We are going to Borgen the bejaysus out of you bunch of Scandi-loving ingrates .

But let us get something straight. When the votes are counted the next time around it has got to be either Fianna Fáil or Fine Gael that doesn’t deliver on our election commitments to social democracy in government. But not both of us together. Because that’s the way we like it.