Ireland is illegally turning back Georgian and Albanian immigrants 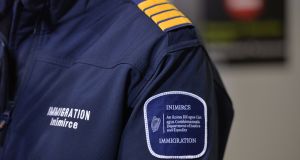 Minister for Justice Charlie Flanagan has acknowledged the existence of the the measures, by which Georgians and Albanians who disembark with false travel documents are being sent back on return flights. Photograph: Alan Betson/The Irish Times

Immigration-control measures at Dublin airport targeting Georgians and Albanians may have been scaled back in recent weeks, but they remain illegal under international, European and Irish law.

Minister for Justice Charlie Flanagan has acknowledged the existence of the the measures. Immigration checks which normally take place at passport control have been moved to the steps of aircraft, and Georgians and Albanians who disembark with false travel documents are being sent back on return flights. The move is intended to stop them destroying their travel documents before presenting themselves at immigration and seeking asylum.

Georgia and Albania are among the top countries of nationality of asylum seekers in Ireland and are considered by Ireland as safe countries of origin. Since the introduction of the new measures at Dublin airport, asylum applications from nationals of these countries have significantly decreased.

This is not surprising: preventing people from disembarking means that they have no opportunity to apply for asylum – something that usually happens at passport control or in-country, at the International Protection Office in Mount Street, Dublin.

According to Garda sources, the new measures are already being scaled back. Nonetheless, the very existence of such a policy, not to mention the frank acknowledgement of it by State officials, is startling. It violates a number of rights that exist in international refugee law, European human rights law and EU law – all of which bind Ireland – and even Irish law itself.

First, there is the right to non-refoulement found in both refugee law and human rights law. In simple terms this is the right not to be sent to a country where there is a real risk of irreparable harm. According to the European Court of Human Rights, it requires a rigorous risk assessment.

Second, human rights law prohibits the collective expulsion of aliens. The prohibition requires an individualised assessment of the legality of each expulsion. It extends to people who have been denied permission to enter the State, provided that they are – as in this case – under the effective control of the State.

These rights are given effect to in Irish law by section 15 of the International Protection Act 2015, which provides that a person “who is at the frontier of the State or who is in the State (whether lawfully or unlawfully) may make an application for international protection”. This acknowledges the reality that strict visa requirements imposed on nationals from asylum-producing countries and the lack of safe pathways for those fleeing harm mean that asylum seekers are often forced to travel on false documents.

Furthermore, these rights apply even where the asylum seeker comes from a co-called “safe country of origin”. This concept involves designating a country of origin as objectively safe on the basis of a number of criteria such the country’s general political and human rights record. It is recognised in both EU law and Irish law.

Being an asylum seeker from a “safe country of origin” means that the application is likely to be fast-tracked and the usual procedural guarantees curtailed. However, it is not a bar to claiming asylum and, indeed, EU law acknowledges that the concept cannot establish an absolute guarantee of safety and requires member states to carry out an individual examination of the application to ensure that the country is safe for the particular person.

Moreover, lawyers, academics and UNHCR have expressed grave concerns about how certain countries of origin come to be designated as “safe”. Frequently, the designation has less to do with the country’s human rights record and more to do with whether it is a significant asylum seeker-producing country. Georgia and Albania were added to Ireland’s list in April 2018, after an increase in applicants from those countries in Ireland (rather than any seismic changes in those countries themselves).

What is going on in Dublin airport would appear to be illegal as a matter of international, European human rights, EU and Irish law and is not “saved” by virtue of the fact that it is targeted at people who come from supposed safe countries of origin.

Sources in the Department of Justice have expressed the hope that the new targeted immigration-control measures will help to take the pressure off the direct provision system.

The well-known and endemic problems with the direct provision system and the asylum procedure are often blamed on asylum seekers themselves. Ireland is presented as being inundated with asylum seekers (from “safe” countries). The reality is that Ireland receives a tiny number of asylum seekers (since 2010 less than 1 per cent of the applications made annually in the EU 28).

A better approach would be to radically reform direct provision, to properly resource the asylum procedure and to provide asylum seekers with early legal advice in order to ensure speedy identification of manifestly well-founded cases.

Dr Ciara Smyth is programme director of the LLM in International Migration and Refugee Law and Policy at the Irish Centre for Human Rights, NUI Galway