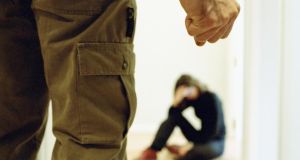 Not having an official record of the extent and depth of the problem is a massive barrier to ending violence against women. Photograph: Enrique Algarra/Imagefile

At least one in five women in Ireland experience domestic or sexual abuse during their lifetimes. We know from resolved cases that more than half of women who are killed die at the hands of a male partner or ex-partner, and that the majority are killed in their own home. Unfortunately, when it comes to violence against women, we do not know a lot more than that.

While the recent headlines surrounding An Garda Síochána and domestic violence statistics highlight the gaps we have in our knowledge, this is not limited to the Garda. It is a system-wide issue that involves all State services that interact with victims and perpetrators.

There are so many questions that we need answers to in order to ensure our response to violence against women is effective. For instance, we don’t know how many women report physical and sexual violence every year; and we don’t know how Traveller and Roma women, migrant women, older and younger women, and women with disabilities, experience domestic and sexual abuse.

We currently rely on European Union surveys, and on data, surveys and case studies from under-resourced frontline support services and non-governmental organisations to provide the picture of domestic and sexual abuse. This is not acceptable or sustainable.

The fact that we don’t know the extent and depth of the problem is a massive barrier to ending violence against women and holding perpetrators to account. Official statistics do not detail incidences of violent crimes against women, and domestic violence in particular, is grossly underestimated.

The national NGO Observatory on Violence Against Women, chaired by the National Women’s Council of Ireland, is continuously highlighting the lack of data and information. It is imperative that our State services, such as An Garda Síochána; Tusla; the Health Service Executive; the Courts Service and the Central Statistics Office come together to record data accurately, and, importantly, to share the data and subsequent analysis.

Our current system is unacceptably archaic. Data is knowledge, and we need this knowledge to tackle both the high numbers of women who are failed by the system, and the low conviction rates for perpetrators.

In relation to domestic violence, a positive development in the collection of data is the ongoing analysis that the Garda is carrying out on domestic homicides over the past 10 years. The findings of this review will be crucial to establishing possible risk factors and early warning signs that are likely to be instrumental in preventing future crimes. It will also help to ensure that Garda services dealing with domestic violence are appropriately equipped and resourced.

As domestic violence is not a specific crime in Ireland and instead comes under other offences – such as assaults or threat to harm – it is more difficult to ascertain its prevalence. Equally troubling is the fact that behaviour commonly associated with domestic violence, namely what could be described as psychological abuse or coercive and controlling behaviour, goes unprosecuted.

In an attempt to address this difficulty, the UK introduced a new offence criminalising controlling or coercive behaviour in an intimate or family relationship where the behaviour has a serious effect on the victim, while Scotland made abuse between intimate partners an aggravating factor in sentencing. We need to seriously consider introducing similar legislation in Ireland.

In the meantime, establishing a clear definition of domestic violence in the current Domestic Violence Bill would provide a full understanding of what constitutes domestic violence and would act as a guide to State bodies and the courts.

Similarly, the new family court committed to in the programme for government and due to open in 2020 provides an important opportunity to establish a new data-gathering system with the capacity to collect nationwide information.

It is positive to see Cosc (the National Office for the Prevention of Domestic, Sexual and Gender-based Violence), the body with the responsibility for domestic, sexual and gender-based violence under the Department the Justice and Equality, co-ordinating the State bodies to establish that gold standard in Ireland.

However, we are a long way off as it stands. Additional resources are required to put effective IT systems in place and to carry out robust surveys and analysis. It has been 15 years since the Savi (Sexual Abuse and Violence in Ireland) report on the prevalence of sexual violence was conducted and recent media reports have highlighted lack of resources as the main barrier to conducting a second Savi report.

To reduce violence against women, we first need to understand the scale of the problem. Reliable and comparable statistics will help us to assess the effectiveness of policy measures and services in place, and to estimate the resources needed to tackle the issue, as well as tracking our progress over time.

We cannot just accept violence and murder of women as a problem that just happens, and we cannot continue to write policy without data.