US president Donald Trump says allegations of sexual misconduct from Christine Blasey Ford against his US Supreme Court nominee Brett Kavanaugh have emerged because the democrats are trying to "destroy" the judge. 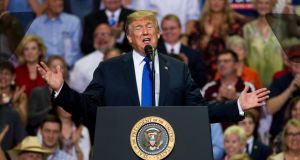 US president Donald Trump mocked the woman who accused US supreme court nominee Brett Kavanaugh of sexually assaulting her, impersonating her at a rally in Mississippi on Tuesday night.

Speaking to tens of thousands of supporters at a “Make America Great Again” rally, Mr Trump pretended to be Christine Blasey Ford. “Thirty-six years ago this happened. I had one beer, right? I had one beer,” he said, impersonating her testimony at the senate judiciary committee last week.

Speaking to supporters at the rally he said that a man’s life was now “in tatters” following the allegations. It follows his comments earlier in the day that it was “a very scary time for young men in America.”

“Is it any wonder that she was terrified to come forward, and that other sexual assault survivors are as well?” he said on Twitter. “She is a remarkable profile in courage. He is a profile in cowardice.”

Ms Blasey Ford said under oath on Thursday that Mr Kavanaugh sexually assaulted her when she was 15.

Earlier in the day as he left Washington Mr Trump lauded supreme court nominee Brett Kavanaugh as an “outstanding judge,” and criticised what he said was a culture of “guilty until proven innocent.”

“My whole life I’ve heard you’re innocent until proven guilty, but now you’re guilty until proven innocent. That is a very, very difficult standard,” he said.

“You can be somebody that was perfect your entire life and somebody could accuse you of something, doesn’t necessarily have to be a woman . . . and you are automatically guilty.”

A vicious, vile and soulless attack on Dr. Christine Blasey Ford. Is it any wonder that she was terrified to come forward, and that other sexual assault survivors are as well? She is a remarkable profile in courage. He is a profile in cowardice. https://t.co/UJ0bGxV1EZ

Mr Trump was echoing comments by his son Donald Trump jnr, who said in a TV interview that the recent controversy over allegations of sexual assault have made him more worried for his sons than his daughters.

Asked if he had a message for women, the US president said that “women are doing great.”

President Trump has himself been accused of sexual assault by more than a dozen women, allegations he has denied.

Mr Trump said that he believed that Mr Kavanaugh would be confirmed, but he added that the FBI must complete its investigation.

“I really think that Judge Kavanaugh is going to be accepted, voted on and positively voted on, but we’ll have to wait and see what the FBI come back with,” he said, adding that he believed that most Republican voters were completely behind the supreme court nominee.

But Mr Trump suggested that his position might change if Mr Kavanaugh is found to have lied to under oath during his testimonies at the Senate Judiciary Committee,

“I don’t think you should lie to Congress. to me that would not be acceptable.

Mr Trump’s comments came as Senate majority leader Mitch McConnell said that the Senate would hold a vote on Kavanaugh’s nomination by the end of the week.

Speaking on the Senate floor, Mr McConnell also poured scorn on a report in the New York Times about Mr Kavanaugh’s drinking habits while a student at Yale, particularly a report that he was questioned by police after an altercation in a bar in 1985, when he was accused of throwing ice at another customer.

“Talk about a bombshell,” he said, disparagingly.

Several former classmates of Mr Kavanaugh have come forward with competing accounts of the supreme court nominee when he was younger.

Amid indications that the FBI could wrap up its investigation earlier than Friday, Democrats are now focusing on the issue of whether Mr Kavanaugh was untruthful under oath as well as his temperament.

“I think there are serious questions about both his credibility and his temperament that may, to some senators, be more important than the activities that occurred in high school,” Senate minority leader Chuck Schumer said.

Mr Kavanaugh’s alleged partisanship has also been raised by some Democrats, in particular his claims that he had been the victim of an orchestrated campaign driven by “pent up anger at president Trump and the 2016 election” and “revenge on behalf of the Clintons.”

Senator Jeff Flake, the Republican senator who insisted that a limited FBI investigation be opened in exchange for his support, said that Mr Kavanaugh’s “sharp and partisan” interaction with members of the committee on Thursday concerned him. He said he would await the findings of the FBI investigation.

“We’ll see what they come back with. I don’t want to prejudge it.”

Senator Lindsey Graham who forcefully defended Mr Kavanaugh during the Senate hearing on Thursday, suggested that Mr Trump should re-nominate Mr Kavanaugh if for some reason his nomination stalls this week.

Asked about the suggestion, Mr Trump said it was “an interesting idea,” declining to say if he would consider it.”