One American takes the fight to Islamic State 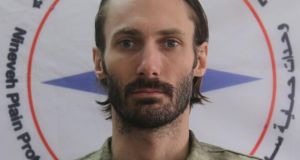 Matthew VanDyke: busy sending US military veterans to train Iraqis on the other side of the fight

The last time Matthew VanDyke saw US journalist James Foley, they were running through war-torn Aleppo in Syria avoiding snipers.

Foley became the most public victim of the Islamic State, the radical Muslim group comprising fundamentalist Sunni Muslims and foreign fighters, when they beheaded him in August 2014.

His killing and that of another US photojournalist, Steven Sotloff, has led VanDyke, an American adventurer and film-maker turned revolutionary fighter, to act for “my friends”. The Baltimore native set up a grassroots military group called Sons of Liberty International, or Soli, in December to train Christian militia fighters in Iraq to protect themselves and win back lands taken by the jihadist group.

“I was thinking about what could be done to take on Isis [Islamic State] and I had good contacts in Iraq so I talked to those contacts about if there were any Christian militias that they could put me in touch with or people who were thinking of forming Christian militias,” said VanDyke (35), speaking to The Irish Times at his home in Philadelphia.

Soli, which has offices in New York and Erbil in northern Iraq, focuses on providing military training and support to Christian militia fighters in the Nineveh Plain, a region of Iraq that borders Syria and which has seen some of the most ferocious fighting.

The region, 400km northwest of Baghdad, is home to a rich mix of minority groups. Between 300,000 and 400,000 Christians call Nineveh home. This includes tens of thousands of refugees, many of whom fled Iraq’s second-largest city, Mosul, which IS seized last summer as part of their self-declared caliphate.

While much attention in the US has been on young Muslim men and women travelling to Syria and Iraq to join IS, VanDyke has been busy sending US military veterans to train Iraqis on the other side of the fight.

He has had more than 500 applicants, most veterans of the Iraq and Afghanistan conflicts. One of his trainers taught at the famed US officer training school West Point, he says, and he has three former lieutenant colonel green berets and at least one Navy Seal on his books.

The trainers are not expressly there to fight but they are armed and will inevitably join the fight given that Soli will have “front-line advisers” on the battlefield, he says.

“The most important question on our [application] form is why you want to join Soli. If they say ‘to fight Isis,’ they are pretty much excluded right away. That is not what we do,” he said.

“We are looking for long-term sustainable solutions. Recruiting a bunch of foreign fighters to go against Isis directly would not be a sustainable solution. You will win battles but you would not win the war. You need a perpetual security force that can close this wound and keep it closed and maintain security region by region if necessary.”

A politics graduate of the University of Maryland, Baltimore County, VanDyke has a master’s in security studies with a focus on the Middle East, from Georgetown University in Washington.

When released, he returned to fight. While staying at the Corinthia Hotel in Tripoli, he shared a room with Foley.

“I had been in solitary confinement so I hadn’t spoken to anybody for about half a year. He was very important to me sort of reintegrating into humanity,” he said.

The US has carried out more than 5,100 air strikes on IS in Iraq and Syria but has refused to send in combat troops on the ground.

Speaking on a rare visit to the Pentagon on Monday, President Barack Obama said in an update on the fight against IS that the campaign would “not be quick” and that it must be the job of local forces with training and air support from a US-led coalition to defeat it.

The next day, the chairman of the joint chiefs, Gen Martin Dempsey, told a congressional committee that when it comes to beating IS, “the silver bullet is getting the Iraqis to fight”.

VanDyke’s strategy is similar to the US government’s limited “whack-a-mole” approach to beating IS in two war-ravaged countries with a patchwork of insurgent groups: empowering local fighters to fight for themselves. His experience in Syria, however, proved to him that locals cannot wait for the international community to step in.

“Governments show up in time to count the bodies, not really to prevent anything from happening,” he said.

“I wanted to create an organisation that can move quickly and be on the ground and create sustainable long-term solutions to security problems by enabling local populations.”

He hopes to travel to Iraq in August or September for more intensive Soli training and maybe to stay two or three months.

Asked whether he has had any military engagements with IS, VanDyke said: “No, not yet.”