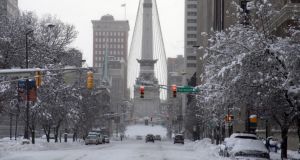 A view of the War Memorial in Indianapolis, Indiana. According to news reports, Indianapolis received about 30 centimeters of snow and the morning temperature was -9 degrees Celsius. Photograph: Steve C Mitchell/EPA 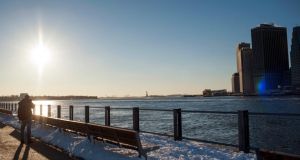 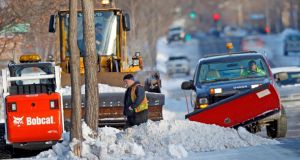 City workers use a variety of plows to remove snow from sidewalks in south Minneapolis. Photograph: Eric Miller/Reuters 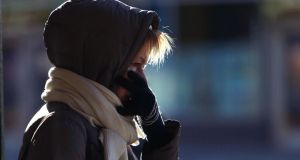 A woman tries to stay warm while waiting for a bus in Coney Island during subzero cold weather in the Brooklyn borough. Photograph: Spencer Platt/Getty Images

Authorities have put about half of the United States under a wind chill warning or cold weather advisory, the icy conditions snarling air, road and rail travel. Temperatures were expected to be 25 degrees to 35 degrees Fahrenheit (14-19 degrees Celsius) below normal from the Midwest to the Southeast, the National Weather Service said.

In New York and Washington DC homeless shelters and other public buildings took in people who were freezing outside.

“My hands were frozen like ice picks. I came in here to get my hands warm, I put them under the hot water here,” said Mike Smith, A 48-year-old homeless man who had been dozing in the lobby of the Martin Luther King Jr Memorial Library in Washington.

Six deaths have been reported across the country since a polar air mass swept over North America over the weekend, producing the coldest temperatures in two decades.

Major US cities were in the grip of temperatures well below freezing, with Chicago seeing temperatures of minus 4 degrees F (minus 20 degrees C), Detroit minus 5 F (minus 21 C) Pittsburgh 1 F (minus 17 C) and Boston 15 F (minus 9 C).

At New York’s Bowery Mission homeless shelter, the 80-bed dormitory was at full capacity last night and 179 other people slept in the chapel and cafeteria, officials said.

“We had our staff go out to walk the neighborhood to make sure everyone was aware they could come in for the night,” said James Winan, a chief development officer at the Bowery Mission.

Washington DC officials opened libraries, recreation centers and other public spaces for people to warm themselves from temperatures that fell to 7 degrees Fahrenheit (minus 14 Celsius).

In the normally mild south, Atlanta recorded its coldest weather on this date in 44 years, when the temperature dropped to 6 degrees Fahrenheit (minus 14 degrees Celsius), while temperatures in northern Florida also briefly dropped below freezing, though the state’s citrus crop was unharmed, according to a major growers’ group.

Among the deaths reported was a 51-year-old homeless man in Columbus, Georgia, whose body was found in an empty lot after spending the night outdoors. Four cold and storm-related deaths were reported around Chicago and an elderly woman was found dead outside her Indianapolis home early Monday.

After running into impassable snow and ice, three Chicago-bound Amtrak trains came to a halt Monday afternoon, stranding more than 500 passengers overnight. They had heat, water, lights and toilet facilities, according to Amtrak.

As of this morning, passengers on two trains, which spent the night on the tracks in Bureau County, Illinois were being transported to Chicago by chartered bus, an Amtrak spokesman said.

The deep freeze disrupted many Americans’ morning commutes today with icy or closed roads and flight delays. Some 2,216 US flights cancelled and roughly 1,952 delayed, according to FlightAware.com, which tracks airline activity.

Hardest hit were travelers who had booked trips on JetBlue Airways Corp, which yesterday halted its flights at New York’s three major airports and Boston Logan International Airport overnight to allow its crews to rest after five days of trying to recover from snow- and cold-related delays. The carried resumed flights by midday today local time.

In the Midwest, airlines scrambled to catch up a day after killer cold caused fuel supplies to freeze solid, leading to extensive flight cancellations, particularly at Chicago O’Hare International Airport.

“This morning’s fueling is slow but consistent,” Ms Fagan said.

Wholesale electricity prices in the central and eastern United States spiked far above their normal seasonal level as homes and businesses needed to use more energy to warm buildings. Power demand in Texas hit a new winter record.

Minneapolis public schools were to be closed for a second day today “due to extremely cold temperatures,” after governor Mark Dayton declared a state of emergency yesterday.

The cold took some visitors to New York by surprise.

“It is unbearable. We arrived yesterday and came out just to shop for more clothes,” said Daniel Bounomie, a 25-year-old Brazilian tourist who was walking through Times Square arm in arm with his shivering sister, wearing the same thin hooded sweatshirt he arrived in.

Outside Boston, the cold had 27-year-old plumber’s assistant Paul Tonnessen scrambling from job to job, repairing pipes that had burst due to freezing.

“Pipes will freeze, heat goes out. You’ve got to go. You can’t leave people without heat on days like today,” he said.