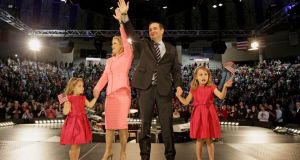 US senator Ted Cruz with his wife Heidi Nelson Cruz and children at Liberty University in Lynchburg, Virginia, on Monday, after announcing his intention to run for president. Cruz’s wacko status is precisely his appeal. Photograph: Jay Paul/Bloomberg

Liberals, political reporters and people who revel in the general recurrent ridiculousness of American politics could not hide their delight in the irony of the moment.

On Tuesday, a day after the freshman Republican senator Ted Cruz of Texas announced he would be running for the presidency in 2016, the conservative firebrand and hater of President Barack Obama’s health insurance scheme made a surprise admission.

He explained that because of his wife’s leave of absence from Goldman Sachs due to his presidential candidacy, he would probably be signing up to Obama’s health insurance scheme.

This is the politician, who along with fellow conservatives on the Tea Party wing of the Republican Party in 2013, attempted to derail Obamacare, as the president’s insurance plan is better known, in a vote on the annual funding of federal agencies that triggered a 16-day government shutdown.

The episode raised Cruz’s national profile (but badly damaged his own party) when he spoke for a bladder-straining 21 hours on the Senate floor in a speech that saw him fill time with a Darth Vader impression and read the children’s story Green Eggs and Ham.

One political analyst, discussing Cruz’s pending Obamacare application, waggishly noted that the character in Dr Seuss’s story was initially disgusted at green eggs and ham but ended up liking them.

Cruz’s announcement that he was running, the first major candidate from either party to declare for 2016, was met in some quarters with the same kind of ridicule as his epic September 2013 speech. Much of the criticism came from his own party, illustrating the depth of anger at his obstructionist tactics in Congress.

“To me, he’s a guy with a big mouth and no results,” said Republican congressman Pete King, who previously accused Cruz of bringing the country “to the edge of ruin” with the shutdown.

“Ted with nukes, Ted with nukes, let’s see . . . ” said South Carolina senator Lindsey Graham, joking during an appearance at the Council on Foreign Relations when asked how a president Cruz would cope with a nuclear standoff. “I dunno what Ted would do.”

On Monday Cruz took to a stage at Liberty University – founded by the late fundamentalist preacher Jerry Falwell – in Virginia to announce his candidacy. By being first, he has got out ahead of other likely candidates in a crowded field such as former senator Rick Santorum, the runner-up in 2012, and one-time Arkansas governor Mike Huckabee who will appeal to the Christian right and the first-in-the-country voters in January’s caucus in conservative Iowa.

As a sample of just how far out some of Cruz’s policies are, the Ivy League-educated lawyer and one-time clerk to conservative chief justice William Rehnquist wants to abolish the Internal Revenue Service (in favour of a simple flat-rate income tax) and reassign 125,000 IRS agents to police the US border with Mexico.

He has promised to repeal the president’s healthcare law (after he signs up, of course); opposes national education standards known as “Common Core,” same-sex marriage and abortion even in cases of rape; staunchly supports Israel; has called “net neutrality” (tougher regulation to achieve equality online) the “Obamacare of the internet” and challenged the scientific consensus on climate change, saying that satellite evidence has shown “zero global warming”.

Santorum has dismissed Cruz and another outspoken Republican Rand Paul, the Kentucky senator, as “bomb throwers,” while the 2008 Republican nominee John McCain once described Cruz as one of “wacko birds on right and left that get the media megaphone”.

This wacko status is precisely Cruz’s appeal. Although a polarising figure among Republicans and lampooned by Democrats, the Texas senator gives voice to what many in the Bible Belt of the South hate about the Beltway of the North: the disconnect between Americans who despise runaway government and excessive federal intrusion in their lives. Cruz’s ability to block the arteries of the national government has seen his popularity soar in the American heartland.

“If standing for liberty and standing for the constitution makes you a wacko, then I am very, very proud wacko bird,” he has said.

Conservatives love his irreverent, anti-establishment rhetoric and while he may fare well early in the primary race, he will struggle to appeal more broadly to the Republican establishment seeking someone who can challenge a strong contender such as Hillary Clinton, the expected Democratic nominee, to win over moderate and swing voters.

Cruz’s 2016 fight appears more a battle to consolidate his conservative support than for the Republican nomination or even the White House. One thing is certain: he will make the race more entertaining as his Obamacare pivot showed this week.