UK woman dies after being exposed to Novichok

Theresa May: ‘I am appalled and shocked... this incident is now being investigated as a murder’ 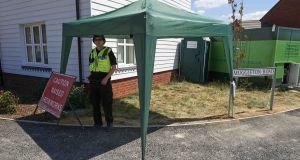 A mother-of-three has died after she and her partner were exposed to Novichok in Amesbury, southern England.

Her partner Charlie Rowley (45) is still in a critical condition after the couple fell ill last Saturday.

Scotland Yard said they have launched a murder investigation — the second major probe involving the nerve agent this year, following the case of Sergei and Yulia Skripal in March.

Tests have revealed that the Amesbury couple were exposed to the nerve agent after touching a contaminated item with their hands.

The possibility that the two investigations might be linked is “clearly a key line of inquiry for police”, the Met said.

“Dawn leaves behind her family, including three children, and our thoughts and prayers are with them at this extremely difficult time.

“The 45-year-old man who fell ill with Dawn remains critically ill in hospital and our thoughts are with him and his family as well.

“This terrible news has only served to strengthen our resolve to identify and bring to justice the person or persons responsible for what I can only describe as an outrageous, reckless and barbaric act.

“Detectives will continue with their painstaking and meticulous work to gather all the available evidence so that we can understand how two citizens came to be exposed with such a deadly substance that tragically cost Dawn her life.”

Ms Sturgess’s family are being given support by specialist officers and have asked for privacy.

British prime minister Theresa May said she is “appalled and shocked”, and sent her “thoughts and condolences” to the family.

“Police and security officials are working urgently to establish the facts of this incident, which is now being investigated as a murder,” she added.

“The government is committed to providing full support to the local community as it deals with this tragedy.”

A post-mortem will be scheduled to take place in due course.

The Russian embassy hit back, accusing the government of trying to “muddy the waters” and “frighten its own citizens”.

The Defence Science and Technology Laboratory at Porton Down confirmed on Wednesday that the victims had been exposed to Novichok.

Novichok remains highly toxic for a considerable period of time, so even the tiniest trace remaining in a container picked up by the victims could account for their severe illness. – PA