New Delhi Letter: Majority of the 20m residents forced to make do with 5-10 litres a day 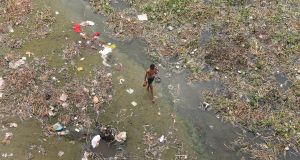 A child walks on the partially dried Yamuna river bed in New Delhi, where groundwater is decreasing at an alarming rate. Photograph: EPA/Harish Tyagi

The enduring water scarcity in India’s crowded capital, New Delhi, is not only causing widespread hardship to millions, but also demonstrating the widespread disparity between the rich and influential and the poor.

Thousands of politicians, senior government officials, military officers and businessmen who live in large, colonial-era bungalows in central Delhi, and in sprawling houses and gated communities across the city, simply do not face endemic water shortages.

For as little as €13 a month the well-off get piped water round the clock to spray their manicured lawns, wash their stable of cars and even shower their pets, many of them miserable in the city’s searing heat, with temperatures hovering around 40 degrees.

Delhi’s government district and cantonment areas get about 375 litres of water per person each day, but the majority of the city’s more than 20 million residents are forced to make do with less than 5-10 litres, if they are lucky.

Delhi needs 3,324 million litres of water each day, but gets about only 2,034 million litres, a majority of which is consumed by the capital’s privileged.

Serpentine queues snake around hundreds of city neighbourhoods as people wait in the hot sun for hours for infrequent municipal water tankers, which often fail to materialise. They bring with them an assortment of receptacles like buckets, jerry cans, plastic bottles and even saucepans.

“My entire day is spent hunting for water,” said Shakuntla Devi, a widow who lives in a massive housing sprawl in south Delhi. Getting water to drink is Devi’s priority every day, she says, as she cannot afford to buy bottled water.

Delayed monsoon rains, which normally alleviate a large proportion of the capital’s water shortages by early July, are aggravating the drought and adding to people’s woes.

According to the meteorological department, this summer has been Delhi’s second driest in 26 years. It also recorded its highest ever temperature of 48 degrees in early June. In desperation, some city residents are conducting elaborate Yagnas or Hindu rituals around a fire to petition the gods for rain.

Furthermore, locals in water-starved areas claim that many of the boreholes have been taken over by private syndicates, backed by criminal gangs and local politicians, who charge astronomical sums for water.

Various studies have revealed that nearly half of Delhi’s water supply from the municipality either gets stolen with the assistance of officials, or leaks out through rusty pipes that have not been replaced for decades.

A recent report by the National Institute for Transforming India (or NITI Aayog), headed by prime minister Narendra Modi, showed that in 24 of 29 Indian states the water crisis is poised to worsen in future, as few or no water harvesting or water conservation measures had been initiated by the authorities.

The report also stated that, by 2020, some 20 Indian cities such as Delhi, global information technology centres like Bangalore, nearby Hyderabad and Chennai were also likely to run out of ground water, affecting more than 120 million residents.

It said that, like Cape Town in South Africa, Delhi and Bangalore faced the grim prospect of “Day Zero”, when its water taps would run permanently dry if measures to avert the looming crisis were not implemented.

In Chennai (formerly Madras), the water situation over the past few weeks has become dire, with offices, hotels and restaurants closing down as most of the reservoirs were parched and the monsoon rains had bypassed the port city. Trains ferry water in tankers to Madras from neighbouring Kerala state, but many locals had fled the city in recent weeks.

“Critical ground water resources that account for 40 per cent of India’s water supply are being depleted at unsustainable rates,” the NITI Aayog analysis said, calling for the immediate implementation of sustainable water resources.

It affirmed that climate change, deficient rainfall, the onset of early and extended summer and rising populations across India were collectively making it impossible for urban municipalities to meet rising water demands.

Besides, some 163 million of India’s population of 1.3 billion lacked access to clean water close to their homes, the largest such number of any country, according to a recent report by the UK-based charity WaterAid. Another 200,000 Indians died each year after drinking contaminated water.

Meanwhile, the looming nationwide water crisis has finally compelled Modi’s Hindu nationalist Bharatiya Janata Party government to push for a massive water conservation programme by creating a ministry to deal with the calamity. But many activists are sceptical.