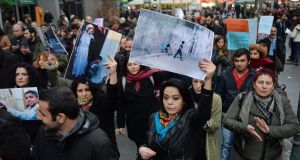 Members of left-wing groups rally to call for an end to the violence between security forces and Kurdish militants. Photograph: Adem Altanadem/AFP/Getty Images

The Syrian Kurdish PYD party on Sunday rejected Turkish demands that allied militia withdraw from positions near the border that are being shelled by Turkish army, and warned that Syrians would resist any Turkish intervention in the country.

Saleh Muslim, the co-chair of the PYD, said Turkey had no right to intervene in Syria’s internal affairs, adding that an air base shelled by the Turkish army on Saturday had been in the hands of the al Qaeda-linked Nusra Front until forces allied to the PYD captured it last week.

Turkey on Saturday demanded the powerful Syrian Kurdish YPG militia withdraw from areas that it had captured in the northern Aleppo region in recent days from insurgents in Syria, including the Menagh air base. The shelling has targeted those areas.

Turkey has been alarmed by the expansion of Kurdish sway in northern Syria since the start of the conflict in 2011. The YPG controls nearly all of Syria’s northern frontier with Turkey, and has been a close ally of the United States in the campaign against Islamic State in Syria.

But Ankara views the group as an extension of the Kurdistan Workers Party (PKK), which has waged a three-decade-old insurgency for autonomy in southeast Turkey.

Prime minister Ahmet Davutoglu said on Saturday the shelling had taken place under “the rules of engagement against forces that represented a threat in Azaz and the surrounding area”.

He demanded that the Menagh base be evacuated and said he had spoken to US vice president Joe Biden to make that point and stress that the PYD was an extension of the PKK and a direct threat to Turkey.

The shelling intensified at 2am (0000 GMT) before dying down but not stopping, said the Observatory, which reports on the war using a network of sources on the ground.

The Kurdish-backed Syria Democratic Forces (SDF) alliance was also fighting Syrian insurgents near the town of Tel Rifaat in the province of Aleppo, the Observatory said.

One of the armed groups in the SDF, Jaysh al-Thuwwar, warned Turkey against any escalation, saying if it “has goals in our dear nation, we will defend our land and our people, and view it as a hostile party”.

Syria’s military, backed by Russian air strikes, is fighting Syrian insurgents in the same area, trying to seal the frontier with Turkey and reclaim areas of Aleppo city held by rebels.

Syrian rebels say the YPG is fighting with the Syrian military and its allies against them in the five-year-old civil war.

The YPG denies this.