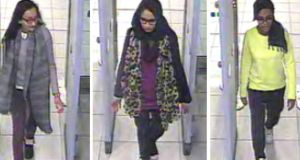 British police said they believed that three London schoolgirls who travelled to Turkey as part of an attempt to join Islamic State (Isis) militants in the Middle East have now crossed into Syria.

“Officers . . . leading the investigation into the three missing schoolgirls from east London, now have reason to believe that they are no longer in Turkey and have crossed into Syria,” police said in a statement.

No further details were provided but police said they continued to work closely with Turkish authorities on the investigation.

The girls have prompted widespread concern in Britain. Prime minister David Cameron earlier urged social media firms to do more to deal with online extremism, saying the girls appeared to have been radicalised “in their bedrooms”.

The three girls are friends with a fourth teenage girl from the same school who police believe is already in Syria, having travelled to Turkey in December.

Police said their families, who have issued urgent appeals for their daughters to return, have been surprised and devastated by their disappearance.

Security forces estimate some 600 British Muslims have travelled to the region to join the conflict there, some with Isis.