Over 850,000 civilians have fled fighting in historic district that once was Iraq’s capital 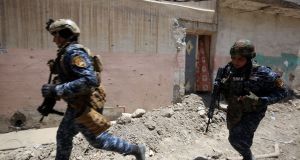 Iraqi forces began storming the Islamic State-held Old City of Mosul on Sunday, in an assault they hope will be the last in the eight-month-old campaign to seize the militants’ stronghold.

The historic district, and a tiny area to its north, are the only parts of the city still under control of the Islamists. Mosul used to be the Iraqi capital of the group, also known as Isis.

“Iraqi forces early this morning breach into old Mosul, the final Isis-held district in the city,” Brett McGurk, the US envoy to the international coalition fighting Islamic State, said on Twitter. “We are proud to stand with them.”

The Iraqi army estimates the number of Islamic State fighters at no more than 300, down from nearly 6,000 in the city when the battle of Mosul started on October 17th.

But the Old City is a densely-populated maze of narrow alleyways and the fighting is slow, bloody and house-to-house.

About 100,000 civilians are trapped, with little food, water or medical treatment.

“This will be a terrifying time for around 100,000 people still trapped in Mosul’s Old City . . . now at risk of getting caught up in the fierce street fighting to come,” the International Rescue Committee (IRC) said.

“This is the final chapter” of the offensive to take Mosul, said Lieut Gen Abdul Ghani al-Assadi, senior commander in Mosul of the elite Iraqi Counter Terrorism Service (CTS) units spearheading the assault.

A US-led international coalition is providing air and ground support to the campaign.

Several air strikes during the day hit a medical complex just north of the Old City, alongside the western bank of the Tigris river, a Reuters TV reporter said.

Armoured vehicles were heading toward the front line north of the Old City, and shelling and gunfire could be heard.

The medical complex, housing the two biggest hospitals of Mosul, is still held in part by the militants who are using its buildings as sniper outposts.

A high-ranking Islamic State figure in charge of intelligence in Mosul, Shakir Mahmud Hamad, was captured by the advancing troops in the Old City, Hashimi said.

The Iraqi government initially hoped to take Mosul by the end of 2016, but the campaign took longer as militants reinforced positions in civilian areas to fight back.

Islamic State is using suicide car and motorbike bombs, booby traps and sniper and mortar fire against the troops.

“The buildings of the old town are particularly vulnerable to collapse even if they aren’t directly targeted, which could lead to even more civilian deaths than the hundreds killed so far in air strikes across the rest of the city,” the IRC said.

Hundreds of civilians fleeing the Old City have been killed in the past three weeks, as Iraqi forces could not fully secure exit corridors.

“An estimated 50,000 children are in grave danger as the fighting in Mosul enters what is likely to be its deadliest phase yet,” Save the Children warned in a statement.

“We expect thousands of families to escape from the Old City. We have made all preparations to evacuate them from the front lines,” army colonel Salam Faraj said.

Islamic State snipers are shooting at families trying to flee on foot or by boat across the Tigris, as part of a tactic to keep civilians as human shields, the United Nations said on Friday.

The fall of Mosul would, in effect, mark the end of the Iraqi half of the “caliphate” that Islamic State leader Abu Bakr al-Baghdadi declared in a speech from a mosque in the Old City three years ago and which once covered large areas of Iraq and Syria.

1 Bobby Storey: The IRA's planner and enforcer who stayed in the shadows
2 Covid-19: Travel restrictions to stay and 'green list' put on hold amid fears of second wave
3 Gardaí seek help in finding missing Roscommon toddler
4 Coronavirus claims one more life while 11 new cases reported in Republic
5 Rare whale dies after getting into distress in Wicklow Harbour
Real news has value SUBSCRIBE