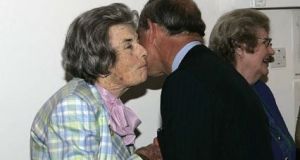 Countess Mountbatten of Burma with Prince Charles in 2005. She was injured in an IRA blast off the coast of Co Sligo in 1979 that killed her father, the Earl Mountbatten. File photograph: Getty Images

Countess Mountbatten of Burma has died at the age of 93.

The countess’s father Earl Mountbatten, her 14-year-old son Nicholas Knatchbull and her mother-in-law the Dowager Lady Brabourne were all murdered by the IRA in 1979 when their boat was blown up off the coast of Sligo.

The countess, then known as Lady Brabourne, suffered serious injuries, but survived the blast, as did her husband Lord Brabourne and Nicholas’s twin brother Timothy.

Born Patricia Mountbatten, the countess was the Duke of Edinburgh’s first cousin.

A Buckingham Palace spokeswoman said: “The queen and the duke are aware and have privately passed on their condolences.”

The countess died peacefully at her home on Tuesday in Mersham, Kent, surrounded by her children, her relatives said.

A statement issued on behalf of the Knatchbull and Mountbatten families said: “It is with great sadness that we announce the death of the Countess Mountbatten of Burma.

“Patricia Mountbatten died peacefully on Tuesday 13th June at her home in Mersham, Kent, surrounded by her children. Her husband, the celebrated film producer Lord Brabourne, died in 2005.

“The arrangements for a funeral in London followed by a burial service in Mersham will be announced in due course.”

Her husband Lord Brabourne was the producer of films such as A Passage To India and Death On The Nile, and they had eight children together - including Nicholas.

She was godmother to the Prince of Wales. The then Princess Elizabeth, her third cousin, was one of her bridesmaids at her wedding in 1946.

The countess once recalled how she cried every morning on waking for about six months after the IRA bomb attack.

In a book by a bereavement charity, she referred to “the seemingly endless black tunnel” through which those left behind have to pass to reach “the light that truly does appear at the end, and which we eventually found ourselves”.

For more than 30 years she used her own personal experience of loss to help other bereaved parents, through her support of the charities Child Bereavement UK and Compassionate Friends.