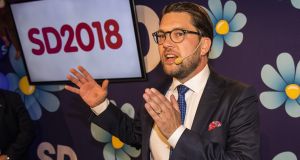 Leader of the far-right Sweden Democrats Jimmy Akesson speaks to members and supporters at the party following the party’s gains. Photograph: Getty Images

Sweden is facing a new political era after general election results suggested almost one in five voters backed the far-right.

With support evenly divided between centre-left and centre-right blocs – and both short of a majority – the far-right Sweden Democrats (SD) will have considerable influence in the new Riksdag parliament.

The 30-year-old party with Nazi roots, pushing an anti-immigrant and eurosceptic agenda, was edging towards 18 per cent last night, up more than four points on the last election.

Though not clear whether it would emerge as second or third political force, SD leader Jimmie Åkesson said it was “not hard to find the winner of this election”.

“We are going to have a tremendous influence over what is going to happen in Sweden in the near future and no one will take that from us,” said the 39-year-old leader.

With almost all districts counted, the outgoing centre-left coalition were projected to have 143 seats in the new parliament – 32 seats short of a majority. But the Social Democrats’ hopes of a return to power is uncertain after an unprecedented slump in support to 28 per cent.

Meanwhile, their Green Party allies, on 4.4 per cent, were dangerously close to the 4 per cent parliamentary hurdle.

The SD – isolated by all other parties until now – took 17.7 per cent in preliminary results and was forecast to hold the balance of power with 63 seats.

Such a final result would shatter post-war Sweden’s political model and throw open what new ruling coalition will emerge. One option is a grand coalition between the Social Democrats and the conservative-liberal Moderates.

Its leader Ulf Kristersson refused to be draw on that option, calling on Mr Löfven to resign last night. He vowed to form a government “that can collect our country and take responsibility in a complicated situation”.

But he refused to say how, in particular whether he would hold to his pre-election promise not to work with the SD.