Under government plan, dictator’s body would be reburied in a less divisive site 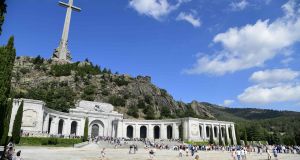 The basilica at the Valley of the Fallen in San Lorenzo del Escorial near Madrid, where Francisco Franco is buried. Photograph: Javier Soriano/AFP/Getty Images

One morning in October of last year, a few minutes before Catholic Mass was due to begin in the Valley of the Fallen, the vast monument where Francisco Franco is buried, Enrique Tenreiro created what has become his best-known work of art.

Crouching before the dictator’s tomb, the artist pulled out a paintbrush and hurriedly daubed a red dove on the stone. As a security guard pulled him away, Tenreiro shouted: “For the freedom and reconciliation of all Spaniards!”

Tenreiro ( 50) is now awaiting trial for his piece of performance art and is likely to be fined for defacing the tombstone. However, like millions of Spaniards, he is also awaiting a court decision that could finally change the significance of the Valley of the Fallen, which is in a wooded valley 100km northwest of Madrid.

On Tuesday, the Spanish supreme court is due to rule on the legality of a Socialist government initiative to exhume the remains of Franco, who ruled from 1939 until his death in 1975. Under the plan, the dictator’s body would be dug up and reburied in a less divisive site. The intention is to ensure the Valley of the Fallen, where more than 30,000 victims of both sides of the 1936-39 civil war are also buried, stops being a monument to a fascist leader.

“When you have a wound that is full of pus, you can’t leave it like that,” Tenreiro told The Irish Times. “You have to open it up with a knife and let the pus out – and it will hurt. That’s where we’re at now.”

Tenreiro believes the 150-metre-high stone cross that rises above the underground basilica where the dictator is buried is “a sword thrust into the heart of the Spanish people”.

The government plan has been plagued by legal and procedural obstacles that have delayed the process by over a year and threatened to make it a political embarrassment.

Acting prime minister Pedro Sánchez originally announced the exhumation on taking office, in June 2018, promising it would take place within months. However, although parliament backed the plan, bureaucratic hurdles meant that the deadline was repeatedly pushed back.

Further delay has been caused by the opposition of Franco’s grandchildren, who filed the appeal against the exhumation and on which the supreme court will now rule.

Juan Chicharro, president of the Francisco Franco Foundation, which promotes the image of the dictator and backs the appeal, argues that Franco should be left where he is because he is such an important part of history.

He also claims that Sánchez’s scheme has already backfired because of the publicity it has given to the dictator. The number of visitors to the Valley of the Fallen has risen sharply since the exhumation issue arose.

“A lot of young people didn’t know who Franco was until a year ago,” he said. “Mr Sánchez, unintentionally or not, has offered a defence of Franco.”

Reports suggest that the supreme court judges are likely to support the government plan. However, they are believed to be more divided on the Franco family’s request that, if the exhumation should go ahead, the remains should be allowed to be reburied in a crypt beneath Almudena Cathedral in Madrid, where they own a plot.

The prospect of central Madrid becoming a shrine to the Generalísimo and a pilgrimage site for the far-right alarms the government. It would surely not push ahead if the supreme court approved the exhumation while also endorsing the family’s reburial wishes.

As the issue has dragged on, campaign groups have emerged on both sides, reflecting how Spain’s historical memory tends to reinforce left-right divisions. The only thing both sides do seem to agree upon is the significance of the upcoming ruling.

A far-right group acting under the slogan “El Valle no se toca” (or “the Valley of the Fallen must not be touched”) has warned of the “enormous historical responsibility” resting on the court’s decision.

Meanwhile, leftist historical memory activists will demonstrate outside the court in favour of the exhumation. A group called Ni Valle ni Almudena (“Neither Valley of the Fallen nor Almudena Cathedral”) said: “Ensuring that the exhumation of Franco takes place, as was agreed by parliament, represents a litmus test for the quality of Spanish democracy.”