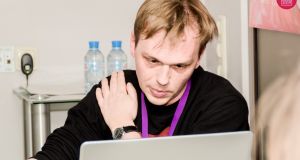 A Russian investigative journalist arrested on controversial drug charges has been seriously beaten by police while in custody, his lawyers have said.

A doctor who inspected journalist Ivan Golunov said he may have broken ribs and a concussion and may have suffered a haematoma as well.

Mr Golunov, a reporter for the independent Meduza news website, was arrested on drug charges on Friday. Colleagues and friends believe he is being targeted for his work investigating state corruption and shady business interests.

Two separate teams of doctors suggested that Mr Golunov be taken to hospital and have X-rays taken, lawyers said, but police investigators refused. The injuries were sustained while Mr Golunov was in custody, his lawyer Dmitri Dzhulai confirmed by text message.

Mr Golunov had earlier said he had been punched and kicked about the head and chest by police because he refused to sign a police report before he had access to a lawyer.

He was formally charged on Saturday with drug possession with intent to sell, a crime that carries a prison sentence of 10-20 years. Police said that they found 3.56g of the club drug mephedrone in a backpack belonging to Mr Golunov and 5.42g of cocaine in an apartment he purportedly rented in Moscow. Mr Golunov has said the drugs were planted.

Hundreds protested outside Moscow’s police headquarters on Friday against his arrest, holding signs in support of Mr Golunov with messages such as: “My name is Ivan Golunov. I am a journalist. Arrest me, too.”

Police have also tried to limit the flow of information to the public about the case, demanding that Mr Golunov’s lawyers sign non-disclosure agreements. They have refused.

Mr Golunov has investigated family members of a Moscow deputy mayor who amassed a fortune in real estate, predatory lenders who purchased apartments in Moscow, and plans to ship Moscow’s waste to the regions. He also revealed that a senior official’s son tried to corner Russia’s funeral market.

He had been receiving threats before his arrest, his editors said.

“Ivan Golunov is a prominent critic and his investigations into government corruption clearly did not go down well with the authorities. It seems he is now paying the price,” said Natalia Zviagina, director of Amnesty International’s Russia office. “The circumstances of Ivan Golunov’s detention sound dubious and follow a depressingly familiar pattern.” – Guardian